From our last entry, we head a block north to one of the best-preserved turn-of-the-century streets in the city. 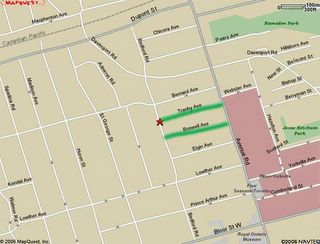 The origin of the name Tranby is unknown, though the best guess I've seen is a town in Yorkshire. Tom Cruickshank and John De Visser's 2003 book Old Toronto Houses provides a brief sketch of the street's origins:

Tranby Avenue was an afterthought - an annex to the Annex, if you will - carved out of one of the last intact estate properties in the area. It is noticeably narrower than neighbouring streets and even more intimate. Lined with a random patchwork of brick terraces and duplexes, virtually all of Tranby Avenue went up between 1889 and 1892. But far from monotonous, the street is alive with gables and architectural curios, the whole unified by the omnipresence of warm, red brick. This has to be one of the most harmonious walks in all of Toronto. (202) 
The outlines of lot areas for Tranby coincided with the lines of an existing fence that had defined the three-acre lot of Bernard Saunders on Avenue Road, and it is the meanderings of the fence line with account for the irregularity of the of the lot sizes on both sides of Tranby. (128)


Favourite name among the original residents of the street: J.D. Clinkunbroomer, who resided at 71-73. While walking down Tranby, you'll notice that nearly all of the homes bear a plaque from the Toronto Historical Board (now Heritage Toronto). Nearly all were placed in 1984, as part of the city's 150th birthday. Given the historical nature of the street, it's not surprising that there are so many notices pasted on the renovations to this home. Among the suggested guidelines from the Heritage Study:


Tranby has the greatest uniformity in its buildings of any of the East Annex streets. For that reason greater attention should be given to detail elements such as porches and front steps to reinforce and support the cohesive character of the street...in general alterations should be discouraged on the front faces of buildings on Tranby, and alterations should be modelled on precedents within the street. (131) Interesting mix of old and new in the front of this home. The end of Tranby, at Avenue Rd. Note directions to guide customers around the one-way.

Next: Backstreets travels across the pond for a few sidestreets of London...if I can remember how to get to Haunch of Venison Yard. - JB
Scribbled at 9:02 PM

Email ThisBlogThis!Share to TwitterShare to FacebookShare to Pinterest
Labels: backstreets of toronto, toronto