random picture of a lily pad at point pelee Photo taken September 2005 - JB
Scribbled at 1:11 AM No comments: Links to this post

With all the furor about the city's new garbage recepticles, I haven't seen much outcry about the new infomaps popping up in local parks. Their supposed raison d'etre, a neighbourhood map, is hidden by the ads on the outward panels. You'd think the maps would face the street...

UPDATE SEP 26TH - Spacing magazine nicely sums up how crappy these are. Note the appropriate advertiser.

It's official: the National Post reunion is being held at Macleans magazine. All you have to do is check any site following Canadian media. New editor Kenneth Whyte is piling on former Post writers as the magazine takes a more sensational right-wing tack to rebuild its sales. My department has a subscription and my jaw drops further with each issue...though it was funny to see the word "pecker" on this week's cover (the Brian Mulroney bio). Still, with each issue, the urge to take a match to it increases, especially after the friendly look at Wal-Mart.

The other mag our department gets is Time, which has temporarily ceased putting angels on every other cover.

Speaking of Mulroney, the brouhaha over Peter C. Newman's bio of one of my least favourite Prime Ministers brings a new light to something that happened to me. Back in grade 12, I was sent to Ottawa for a week as part of a national youth leadership program...Forum for Young Canadians, or something like that. I wasn't one for "leadership" programs (an attitude I attribute entirely to my old man), but the opportunity to go to Parliament Hill was a good one. During a session in the House of Commons, who should stroll in but our PM, Lyin' Brian. By this point (spring of '93), he'd announced he was stepping down, with a new leader in the wings. He stopped for five minutes, made a joke about Kim Campbell and left. Even then, I had the impression it wasn't the friendliest of jokes, though I've long forgotten what the jab was.

Other memories of that week: sleeping on DND surplus cots in a private school, good speeches from Svend Robinson and Senator Phillipe Gigantes, one uptight coordinator who had to be reprimanded, a kid from the Maritimes I couldn't shake and my purposely showing bad taste in formal wear. Y'see, at all daily activities, participants had to be in jacket and tie. Since I barely owned any, I picked the cheesiest jacket hidden at the back of Dad's closet, a beige cord number I still wear on occasion, and wore shirts and ties that didn't match. Somebody had to stick it to the man!

Come to think of it, maybe I was more rebellious late in high school than memory serves. I didn't go with the proposed script when I became the emergency valedictorian. I skipped assemblies. I refused to be involved in other leadership/motivational events to make me a nice little drone. Because Dad usually pushed me in these directions, it never felt like an open revolt.

In my morning paper: Russell Smith is seriously disturbed by the phrase "Did you remember your ticket" on the Green P parking ticket dispensers because said instruction is "...just not nuanced. It's mot elegant" (the article is a lament to a lost verb tense).

I doubt these are qualities most folks look for while shoving loonies in the meter.
Scribbled at 12:58 PM No comments: Links to this post

Carrying on with our tour... 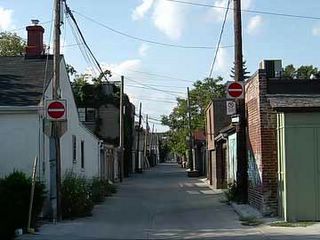 Looking north at the first cross-street, Vankoughnet. Like most one-ways in the Annex, Croft switches directions here. This method of traffic calming confused me when I was little, especially on Brunswick Ave. Because I only ever saw Brunny from Bloor or Harbord, which provide no access onto it, how did cars find their way onto that street?

The reversing one-ways may be confusing, and are hellish if looking for a park forces you onto Bloor on a busy night, but they beat the speed bumps favoured elsewhere.

UPDATE: While passing Croft on the College streetcar on Saturday, I noticed the traffic direction had changed, so that it flowed southbound instead of northbound. I'll check later if the direction has changed for the rest of Croft. 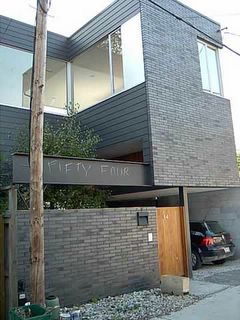 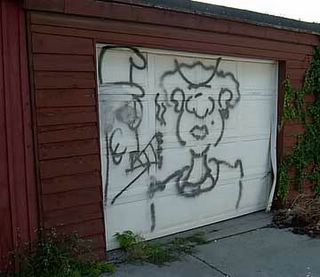 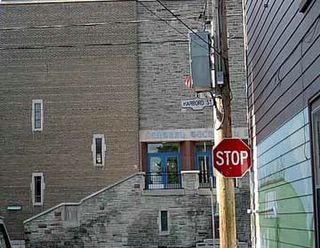 The main stretch of Croft comes to a halt at Harbord St, as Central Tech blocks its path. Originally located at St. Lawrence Hall in 1892, construction began on the school's current site in 1913, the cornerstone laid by Prime Minister Robert Borden. There's a chance this might be the most visible part of Croft, given the many films shot at Central Tech (leaf through this PDF of Toronto sites that stood in for other cities/countries from '79-'99). 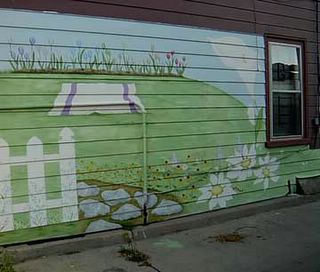 Closeup of the mural on the home at the SE corner of Croft and Harbord. How idyllic.

the mystery of the tofu giveaway box 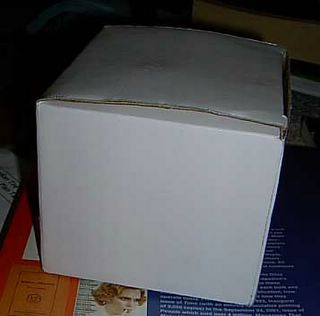 This white box came in a bag of coupons and storage containers given away by Sunrise Tofu at an Asian-themed food show at Exhibition Place. What surprises does it hold? 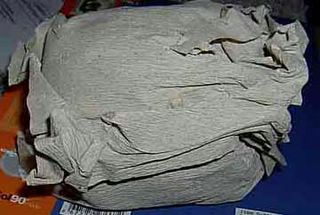 The suspence mounts. What lurks beneath the wrapping? 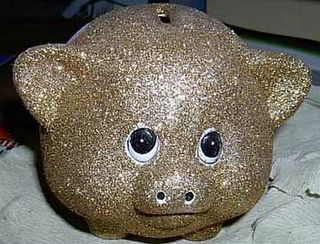 It's a pig! A glittery, gold piggy bank! 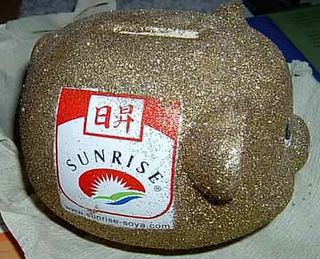 A side view of Goldpig, with a word from its sponsor.

the backstreets of toronto: croft street (part one)

This post is the first of a series looking at some of Toronto's interesting sidestreets, roads waiting to be explored by bicycle or foot. If you have any suggestions for future installments, send them along. First up: Croft Street.

Croft runs through an "in-between" area. The northern stumps fit in with the Annex, while the southern stretch doesn't feel like any neighbourhood in particular - you are within a 5-10 minute walk of Kensington Market (SE), U of T (E) and Little Italy (W). 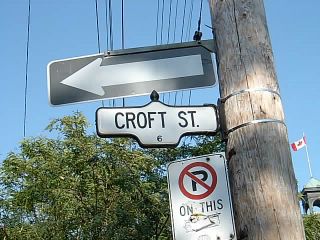 At first glance, it looks like a glorified alley that may have earned a name due to its length. Even as a one-way street, Croft can be a hair-raising trip, with little room for cars and pedestrians to share. 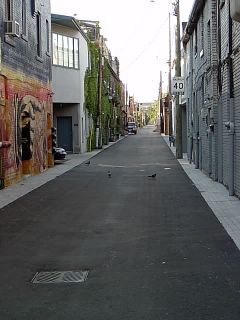 Our walk starts at the south end, with new murals at College commemorating the great Toronto fire of 1904 (also check the Ontario government site here).

The murals illustrate the origins of the street's name, described by Leonard Wise and Allan Gould's in Toronto Street Names:

This street commemorates the life of John Croft (1866-1904), a part-time dynamiter who was killed in an accident after the great fire of April 19-20, 1904. The worst fire in the history of Toronto broke out downtown at 58 Wellington St., just west of Bay. By the time it was finally extinguished by the combined efforts of 250 firemen nine hours later, the fire had destroyed 123 buildings, obliterated 139 businesses, and put 5,000 people out of work. Croft volunteered to help blow up the ruins of a building on Front St. On May 4, after only two charges out of three detonated, he waited for a few minutes and then attempted to defuse it. The dynamite exploded in his face and he died the next morning of his injuries. (Wise and Gould, 65-66) 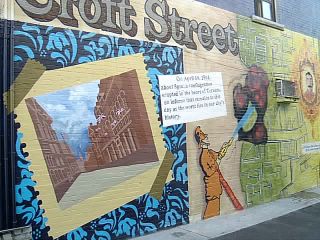 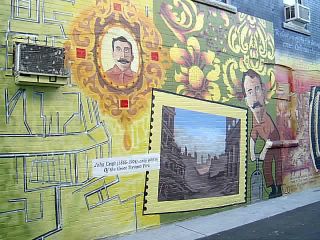 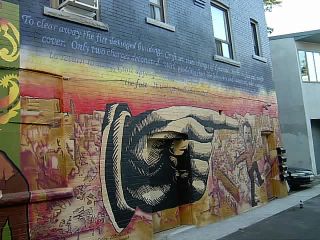 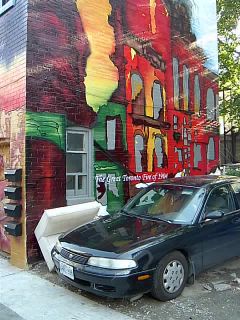 A tragic story, yet the style and bright colours of the murals are in a humourous touch...or I've watched too much Monty Python animation lately.

The artwork continues beyond the murals. Most of the structures facing onto Croft St are car barns. While much of the graffiti isn't noteworthy, some walls and garage doors are striking. 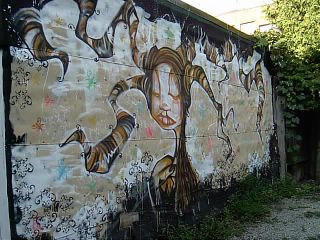 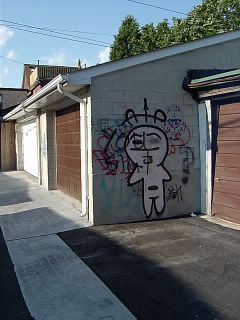 paddle to the marsh

All summer, I've tried to visit Point Pelee. Lack of time or bad weather quashed most attempts, but Amy and I finally made to the southern tip of Canada on Saturday.

We started off at the marsh boardwalk. This faded sign greeted us. 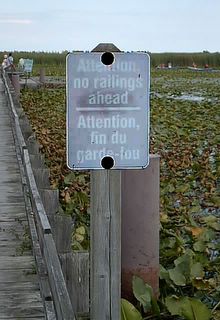 (Note: picture altered to show text on sign - it was faded enough to be useless)

The boardwalk was wobbly but busy. The furthest section and watchtower were closed due to decaying planks - a sign indicated discussion were underway as to its fate. The marsh itself was full of canoeists, which turned the gears in my head. We'd rented a canoe years ago and, other than one crash, suffered no mishaps. Attempts to convince Amy to rent one since were futile. This time, she was open to the idea, so we plonked down our $20 deposit and waiting for one to return (canoe rentals at Pelee are cheap - $10/hr!)

I might have imagined myself as Pierre Trudeau, majestically paddling his canoe, clad in buckskin. The reality was Charles Tupper, John Turner or Kim Campbell (take your pick).

I was all bravado and eagerness...until I got in the canoe. A slight wobble set off my panic button. Onlookers got a good dose of comedy, while Amy and the clerk calmed me down. Once we pushed off, all was good, but I don't think she's going to let me live down those two minutes of panic for awhile.

From the launch ramps, you have to paddle your way up a narrow, winding channel into Lake Pond, the main body of water in the marsh. You float parallel to the boardwalk for the first stretch, then are surrounded by high reeds. The fun part is trying not to destroy patches of lily pads or crash into fellow inexperienced canoers. We managed to avoid the latter, but sent a few pads to meet their maker. The only incident we had was five minutes spent trying to push ourselves out of a bank of reeds near the tighest turn. Amy navigated, while I grew increasingly confident and stronger with the steering. Remnants of a blister on my left hand are my legacy of dodging other canoers. 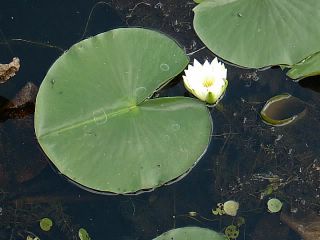 A lily pad we didn't crush.

Everything ran smoothly until we docked the canoe. A slight wobble while attempting to get out of the canoe set off the panic button again. Cue more comedy and a steady hand from the canoe beside us. 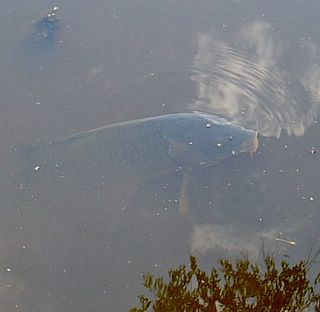 And now...big ugly fish! Is a carp or catfish? Would it taste good grilled?

After a quick trip to the visitor centre, we met up with Mom at Paula's Fish Place, a temple to lake fish just north of the park. As usual, I revolted her with the frog legs that made up part of my combo platter (with super-sweet scallops and blackened pickerel). They look too...leg-like...for her taste.

Amy and I headed back to the park, hoping to go for a quick swim. When we reached the gate, we noticed two signs that we must have missed earlier: high bacteria in the water and stable flies. The latter look like houseflies, but have a more painful bite than a mosquito. Instead, we walked through the woods behind the visitor centre. 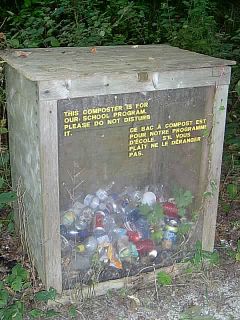 Yes kids, metal cans go in the composter. - JB
Scribbled at 2:36 PM No comments: Links to this post