searching for jack: an untold tale of the spring roadtrip

As mentioned previously, I never finished the tale of my spring swing through New England and Montreal. We go to day 6 on the road, as the intrepid traveller leaves Boston to head back to the Great White North. Today's tale begins a few miles north of Beantown...

Wandered into Lowell. I checked the Boston guide book and discovered this was where Jack Kerouac permanently left the road. I wasn't in a hurry and there wasn't a downpour. Why not look for it?

The graveyard was listed in the guide book, so I checked a map in a grocery store for directions. Found Edson Cemetery, but the office was as lively as the folks in the ground. I drove up and down the numbered streets within the graveyard, looking for any unusual adornments to the graves. All I found was a giant elk.

I asked him for directions. 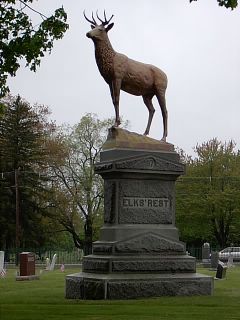 "What are you, some pinko from Soviet Canuckistan? Go away kid, ya bodder me!"

Deciding it was best not to ask him any more questions, I continued criss-crossing the graves, but many of the driveways were blocked off by debris from the lingering nor'easter. After 15 minutes, I gave up.

As I drove away, the elk laughed. - JB
Scribbled at 12:41 AM No comments: Links to this post

Finally getting a chance to explore the city by bicycle again...

This week's long ride started off in Mt. Pleasant Cemetery. I usually discover one well-known tomb passing through - this time, pioneer hockey announcer Foster Hewitt, located close to the Eaton crypt. I couldn't get the Hockey Night in Canada theme out of my head for 10 minutes.

From there, went along the crowded Belt Line trail. My internal radio switched from hockey to traffic reports.

Thanks, John. Eastbound Belt Line is very busy, with walkers backed up between Avenue and Oriole, you may want to switch to Chaplin Cr to avoid delays. Westbound Belt Line is moving smoothly, but watch out for fresh gravel between Eglinton and Bathurst. Now over to Mary to check in on the Don Valley...

Along the way, I discovered a new trail I'd never heard of, the York Belt Line, which runs from west of the Allen to a fence near Caledonia and Eglinton. Paved, fairly flat and relaxing. Several parks along the way full of kids. Many groups of old folks out for a gossipy evening stroll. Had it not been nearing 8pm, I might have been tempted to see how long it would have taken to go from its endpoint to the Humber. Another day...

I headed south along Caledonia, dodging dorks in souped-up 70s muscle cars. Wandered towards downtown along the bike lane on Davenport, noticing that buildings around the spot my father lived as a toddler (Ossington and Davenport) had burned down. I'll have to dig through the family archives back in A'burg to find the exact address - maybe his first home is no more. The ride ended with a bottle of water at a hot dog cart at Yonge and Bloor, before hopping on the subway.

I think my legs have finally adjusted to the bike this year, as my torso didn't feel like it was attached to lead weights the next day. - JB
Scribbled at 11:23 PM No comments: Links to this post

In an optician's window at Duluth and St, Denis, more than eyeglasses were on display... 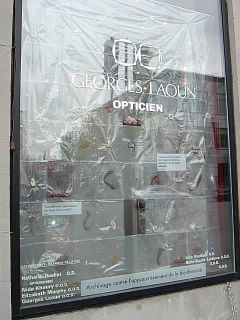 Inside were two women with short black hair in white lab jumpsuits arranging mutilated/mutated baby dolls. The piece appeared to a statement on genetic manipulation, with videos of "ultrasounds" with deformed fetuses. It was credited to "Frank Ketchup", which isn't turning up in net searches. 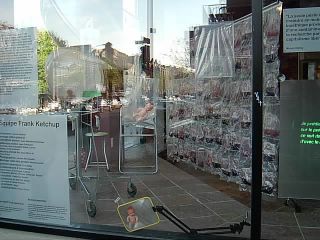 At St. Denis and Duluth, the mutated babies grow
Between the plastic dividers
Row on row - JB
Scribbled at 8:50 PM No comments: Links to this post

Recent headlines surrounding the arrest of marijuana activist Marc Emery and a post on Blamblog yesterday stirred memories of some of my favourite family roadtrips of my early teens.

Many moons ago, Emery ran City Lights book store in London. Two hours away from home, it was an excuse to get away for a whole day. We'd hit the road early, usually stopping for for a snack at the West Lorne service station (the Tim Horton's being a radical improvement over the 1867 restaurant that was there on childhood trips to Toronto, which I only remember for its dinginess and smelly clientele - no wonder we used to picnic on the way to my grandmother's house). Until we grew out of it, our usual first stop was the Superstore Mall on Wellington, due to the plastic ball room in Loblaws. Most of the day was spent downtown. After leaving the car in the crazy parking lot at Wellington Square/Galleria, we'd split up - Mom sticking to the then-thriving mall, Dad and I wandering off to Richmond, Amy joining us for City Lights then racing back to the mall.

We'd exit by Woolworth's/The Bargain Store, then head down King St, past Novack's outdoor store, Fatty Patty's, London Mews and a hotel that changed names every visit. Turn left onto Richmond at the art supply store, pass a couple of store fronts and you had reached cheap used book nirvana.

The comic book bins were across from the cash, varying in the amount of space they took up. All were half cover, minimum 25 cents (as were most books), a godsend for a kid rapidly building their collection. Most memorable finds: a near-complete mid-70s run of Incredible Hulk (#166-202, only missing Wolverine's debut and a few others) and the final issue of Tales of Suspense from 1968. While I searched these and the humour, film and sports sections, Dad sifted through the 10 cent book bins out front, then check out history and fiction. Both of us left with bagfuls that made Mom's eyes roll.

Across the street was another used book store, which I think was called Book Brothers. A bit roomier, a bit dingier, a bit pricier but good for oddball finds like Street & Smith football yearbooks Dad forgot to buy in the 70s. Millions of copies of Marvel Super-Heroes #26 and Nick Fury, Agent of SHIELD #17 stick out in my mind. Later on, a comic book store opened directly across from City Lights with decent bargain bins. Next door to City Lights was a coin shop where I stocked up on cheap 1960s baseball cards. Around the corner on Clarence was Dr. Disc, which wasn't much better than their Windsor outpost.

Times change. City Lights was sold and soon book prices rose and the comic bins vanished. The Galleria emptied. Loblaws abandoned the ball room, then Superstore Mall. Vacant storefronts downtown rose, leaving a stench of death. I headed off to university. Old-style family trips to London were replaced with medical checkups for Dad. If they stayed for the night, I'd pop down from Guelph or Toronto, pop in City Lights for a lone book or album and walk around downtown with a touch of melancholy, remembering how it was. - JB
Scribbled at 9:25 AM No comments: Links to this post

let's all go to dairy freez! 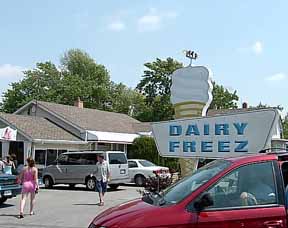 Ah, summertime in Essex County. Time to hop in the car and head east of Essex on old Hwy 3 to the North Ridge Dairy Freez. Open since 1954, it's the last drive-in food stand in the area, a relic that hasn't gone mock-retro. 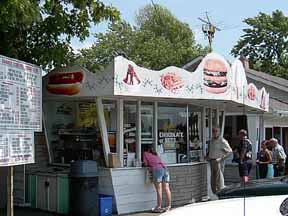 Folks lined up for dairy goodness, while a carhop grabs an order. I don't recall ever ordering food, or ever figuring out what the "Charlie Special" was. This time round, Amy went for a sundae with fresh local peaches, while I had a Boston Cooler - traditionally made with Vernor's, in this case regular ginger ale and soft serve mixed together. 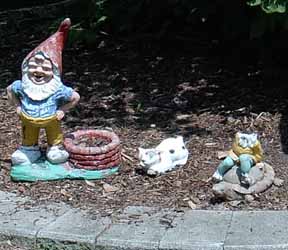 Why is this gnome smiling? Is he proud of his ice cream? Is he surveying a backyard of of picnic tables filled with satisfied customers? Has he snapped from beheading his friend?

even insects enjoy a long weekend 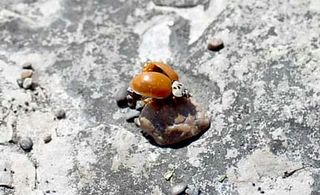 Soaking up some rays. 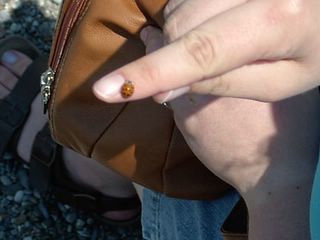 Taken at Mersea Park, Leamington, Aug 1/05.
Scribbled at 11:19 PM No comments: Links to this post