We continue with the second of six vintage Gulf ads discovered in the Warehouse. Commentary by J. Percival Wexford-Snoopington, Ph. D. 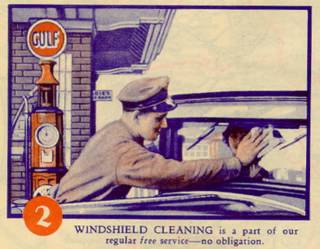 Stations offered various levels of windshield cleaning service. This ad neglects to mention that free service meant a spit shine. Every pump jockey grabbed sticks of Beemans or Black Jack gum to get the saliva going, then go into a single-wing formation to spit at the windshield. Ladies were provided with spitguards in case any attendant had poor aim.

Stations in wealthier areas provided windshield washing with water imported from hot springs across America, promising theraputic benefits for one's jalopy. Only the purest cotton was used to cleanse the glass.

As for the "no obligation", attendants would continually pitch higher-cost services in between questions about Aunt Dot from Springfield. This form of salesmanship eventually became a lost art until it was revived by most modern banking services. - JB
Scribbled at 10:50 PM No comments: Links to this post

Saturday evening was like a baseball doubleheader, only the games were on opposite sides of town.

Our story begins at Lansdowne and Bloor, site of this month's Chowhound dinner. Seven of us met up at Pura Vida, a roomy bar next to the subway station which several people had heard about on CBC Radio. A big screen TV silently played a Spanish translation of A Fistfull of Dollars, while a smaller one showed a soccer show.

We started with a round of appetizers: plantains with a sharp white cheese, nachos and "naked" bread. The name of the latter drew us in, and proved a good choice. Turned out to be a variation on bruschetta, loaded with the same sharp cheese, jalapenos, tomatoes, sharp sour cream, etc. The menu's promise of extra "goodies" with the nachos also caught our eye - good they were, fresh chips loaded with meat, beans, peppers, sour cream, etc., but not overwhelmed by gobs of cheese.

As for the mains, I had baked enchilladas in green sauce, accompanied by rice, black beans and what could be best described as pico de gallo coleslaw. Two had a good-looking fish platter, while the others had hefty rice and seafood dishes. Most thumbs were up.

Towards the end of the meal, the karaoke machine was fired up. As a warm-up, they played oompah music that wouldn't have been out of place in a German beerhall. I expected Heino to show up at any second. We ate dessert while folks warbled Englebert Humperdinck. Kathleen managed to be serenaded by one singer. Those who had dessert went for either a sweet leche cake, or a pineapple pie that tasted more like apple.

One final winning factor: the bill. Seven of us stuffed ourselves for $114, including booze and tax. One margarita was left off, but the waitress let it go.
Scribbled at 12:12 AM No comments: Links to this post

The Warehouse recently found some snapshots of Gulf Oil advertising, from the 20s or 30s. We forget where we picked these up, so apologies are given to whoever we lifted these from. Historical notes have been kindly provided by J. Percival Wexford-Snoopington, Ph. D. This is the first in a series of six ads we'll feature over the next few weeks. 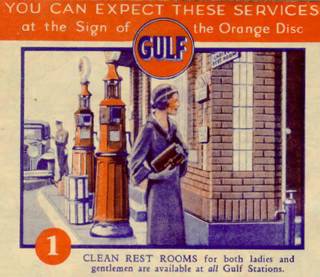 Note that above any other products and services Gulf Oil provided, rest rooms were considered the most important. Gulf's expert team of regional latrine orderlies were the envy of competitors. Even quarts of motor oil and window cleaning were of secondary importance to making sure customers could relieve themselves in the utmost comfort and gentility.

The clean rest room for ladies and gentlemen was the most popular of all. No way any dirt or dirty thoughts ever touched these sterling stations. No way. Nor were the old whiskey stills often found in the rest rooms at the height of Prohibition a draw.

Meanwhile, the extra time motoring couples spent in the rest rooms allowed station attendants plenty of time to take vehicles on joyrides. Few customers noticed the extra pennies on their bill. These joyriders also provided reports on how Gulf fuels and oils affected each model's performance, sending their data back to headquarters so that the research department could further their work on making the most vehicle-friendly products available. - JB
Scribbled at 8:13 PM No comments: Links to this post

Moved the Sunday Constitutional to Saturday this weekend. Extended the usual route, blinded by the sun as I followed Queen to Roncesvalles. Only purchases were a cheap 3-CD set of a Louis Armstrong bio that aired on CBC Radio and Charlie Chaplin's autobiography. Odd conversation in the bookstore I found the latter:

Darn, the last line broke the monosyllabic, rapid-fire rhythm.
Scribbled at 4:30 PM No comments: Links to this post