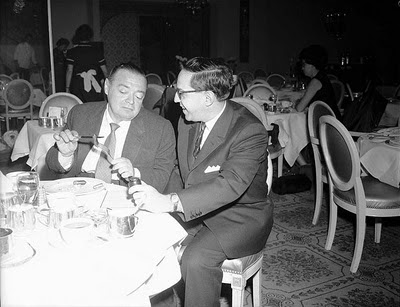 One of the joys of digging through the treasure chest of photos uploaded by the City of Toronto Archives  is finding unusual pictures that end up distracting me from what I’m supposed to be searching for. Take the shot above, found while seeking "dinner" photos.
The scene: a nice restaurant, somewhere in Toronto during the late 1950s or early 1960s (any historic culinary experts good at identifying it?). Actor Peter Lorre is being interviewed by writer Frank Rasky. Lorre holds a sausage, which resembles the breakfast variety despite the picture being taken at dinner, in his fork. He gives it an odd glance. Is Lorre:

While there will be a lot of happy faces at today's Santa Claus Parade today in Toronto, I suspect they may not match the joy expressed along the procession route in 1918. That year's parade rounded out a week that began with the signing of the armistice that ended World War I. Despite the other celebrations and parades that week, Torontonians weren't too pooped to watch Santa make his journey through the city. And a journey it was: back then, the route began at Yonge and Eglinton and made its way south until it reached Eaton's Toyland at the corner of Albert and James (an intersection that survived the construction of the Eaton Centre).