Hey folks, I'm back on my feet again. The cold is in its last stages, just the occasional coughing spell. I should have stayed home on Wednesday, but one meeting and a mound of work did not need to be dumped into anybody's else's lap...which I had to do anyway on Thursday when half of the documents I expected to wrap up lingered on (and were there to welcome me back yesterday - my anxiety was unjustified).

The combination of nasty cold and many other things that went on this week has caused a 42-car pileup in items awaiting entries. Consider the next few a crash course.

True to form, my birthday fell amidst the most oppressively hot days of the year. A few moments of anxiety led into Charlie & The Chocolate Factory, due to tickets selling like hotcakes. We weren't above searching for no-show tickets (got lucky twice), while others just missed the mark. Highly recommend it if you haven't seen it yet - how many movies allow Christopher Lee a touching moment?

Headed over to the Toronto Islands on Saturday, the muggiest day of the year. Want to have fun and dehydrate yourself in a hurry? Walk slowly from Ward's Island to Hanlan's Point, with stops for a picnic and croquet. 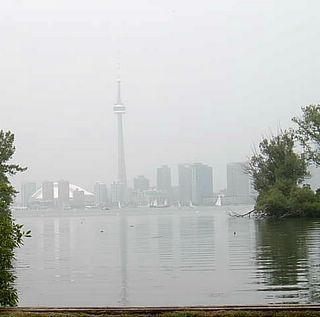 How heavy was the air? Here's a shot of the Toronto skyline, taken east of Centre Island. Not a healthy picture. 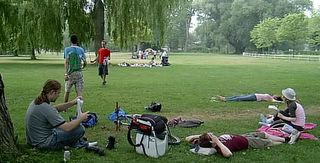 Here's the brave folks who braved the putrid air gearing up for a round of croquet. Steve and Mark prepare the course, James prepares his socks, Elizabeth observes and Paul (foreground) and Shereen (background) lie in peaceful contemplation of winning strategies.

The sky decided against opening up until we were nearly finished dinner, at Margarita's over on Baldwin St. The tostadas were cilantro heaven. After lying in a heap for a couple of hours at home, I headed back downtown to use up the last spot on my Fringe pass. Mark and Jess had the same idea, as I ran into them in line. Pajama Men was a burst of energy when at least two of us had none left - the titular dudes never stopped moving the entire hour. All ended well when I returned to the car at two past midnight on Brunswick and found no parking ticket. Good sign for 30? - JB
Scribbled at 11:16 PM No comments: Links to this post

A recent morning paper included a course calendar for U of T's School of Continuing Studies, whose offerings include a few chuckle-worthy courses.

I'm not necessarily mocking the validity of these course - some of them sound interesting. It's the name or the concept of somebody shelling out $100-600 for these that's funny.

ARTS
Ciao Italia: Have Imagination, Will Travel
Yes, my imaginary Italy includes crowded freeway rest stops where old ladies push you out of the way while ordering lunch at the cafeteria (true story, happened near Genoa).

In Italy, Do As The Italians Do
Course coming next year: In Uzbekistan, Do As The Uzbeks Do.

BUSINESS
Essentials of Competitive Intelligence
a.k.a. How to Cope with Wal-Mart.

Advanced Mediation: Getting Beyond Impasse
Not guaranteed to work if dealing with young Communists, ultra-right wingers or Wal-Mart.

HUMANITIES
Woody Allen and His Comic Film Masterpieces
My favourite Woody movies, Bananas and Sleeper, aren't listed. Maybe they want to milk Marshall McLuhan's cameo in Annie Hall for all it's worth.

Thumbs Up
a.k.a Let's Train Roger Ebert's Replacement! Amy recently posted a pic of Ebert that looked eerily like our father during the last year of his life.

Celebrity History of Canada
a.k.a. Alex Trebek and Lorne Greene 101. They mispelled Pa Cartwright's name in the calendar. Maybe the Lorne Green they're referring to is the assistant service manager at my garage (not a celebrity, but provides good service). From the names listed, looks like they're going to have diagrams of William Shatner's rug, a rare sample of what's left of Bobby Orr's knees and the football that sank Robert Stanfield.

Diana, Princess of Wales
Courses coming next year: Bennifer, The Mystique of Zsa Zsa Gabor and The Wit and Wisdom of Prince Philip.

WELL-LIVED LIFE
How to Buy, Sell and Prosper on eBay: Parts I and II
Based on the hit 1977 James Brown song. Insider tip: make sure your US customers use the correct type of money order!

Writing Song Lyrics
a.k.a. Recapturing Teen Angst 101. - JB
Scribbled at 9:18 AM No comments: Links to this post

brought to you by Prudential - Get a Piece of the Rock
and EF Hutton - When EF Hutton Talks, People Listen

Three down, three to go in this year's sampling of the Fringe theatre fest. Let's cut to the chase, sports fans - here's the roundup so far, in alphabetical order:

(Eye ratings based on a scale of five stars, Now on five Ns)

Confessions of a Class Clown (**** eye, NNNN Now)
The Glen Morris has a reputation for being the kiln of Fringe venues. When I volunteered a few years ago, others shuddered whenever it was mentioned, thanking their lucky stars they didn't wind up there. Given how steamy it was last night, and hearing how others had their enjoyment of shows there this year damped by the heat, would it be worth it to check anything out?

This show was worth the sauna effect.

A one-man recounting of his experiences as a school cut-up, then his experiences seeing such behaviour crop up on provincial English exams he marked, it managed to be funny and thought-provoking. I think I went to school with kids who latched onto "the system" quickly, as I don't recall many clowns in my year beyond the early grades (exceptions I can think of were embarassing funny, such as the annual public dumping of one guy's desk or my general klutziness). I sympathized with the tale of a paper where, when asked to provide a rule of grammar, a student indicated the versatility of the f-word as noun, verb, adjective and split infinitive, recalling the elementary school IQ tests that I purposely mucked around with (resulting in a second quiz from the principal when my results were odder than expected...which could lead to a future entry on my brief, less-than-happy stint as a "gifted" student in grade 5).

Energetic, but not wildly over-the-top, a good storyteller than made the hour fly by. The heat didn't get in the way...besides, it was probably worse on the stage.

I think my sister would have appreciated this show and its underlying frustrations with education.

Hip Hop 4 Dummeez (*** eye, NNNN Now)
A show with high expectations going in, thanks to the performers' track record (Job: The Musical). Met up with Nile to catch this one, where we hung out with Jess, Mark and Megan under the beer tent. Mostly we waited for water, a hot commodity on a scorcher of a Sunday.

The first disc flew by in a hurry, with its "lessons" on hip-hop linguistics. I'm resisting the urge to add "iz" to every other word. Fall-off-your-chair funny. Packed house was roaring.

The second disc wasn't as strong - the laughs continued, but not as consistently, running off the rails with a slightly sappy ending. The subplot about joining a gang despite it not being part of the group's golden rules could have been milked in funnier directions than it was.

Other than those quibbles, I enjoyed it and strongly recommend the first half.

Afterwards, I wandered off in search of dinner, which wound up being the Sunday Constitutional (TM) standard of Korean. Ran into the beer tent crowd again and we caught the Late Night at the Fringe show, featuring an interview with a Slurpee.

Oz Recalled (** eye, NN Now)
Funny story about this one: got an e-mail from an old Arts Hausian last week, Jennifer, who was coming up to the city and had some spare time to catch a Fringe show. She suggested Oz Recalled, since one of the names attached to it was the same as a guy who lived on our floor first year. Not the case, which made it easier to pull out the knives on the weaknesses of this production.

On the plus side, Dorothy was a good singer, the Tin Man had a good grasp on his character and the choreography was a-ok (helped by hot dancers). On the minus side, the world did not need an excessively rambling psychoanalytic Scarecrow, the lyrics were blandly repetitive and the plot resolution was just there.

Over on the eye boards, there's a debate going on involving the writer's deeper intentions. Any uber-deep meaning in the script didn't come across onstage - all I walked away with was don't forget the good times in your past that mattered to you (by comparison, Class Clown had my noggin working most of the night).

Coming up, as soon as out photographer unloads his camera, the Fringe House o' Cards! - JB

PS - Leave your Fringe picks and pans in the comments section - regular contribs can e-mail me if you have longer thoughts that can be used for an entry!
Scribbled at 10:12 AM No comments: Links to this post