Not a good outing. Should have stayed in Toronto for Jordo's send-off (which was promising to be a good time, despite the drizzle on the Madison's patio).

Frozen Warnings - Nico
I should have heeded her warnings.

Ramblin' Gamblin' Man - Bob Seger System
Farmer John - Tidal Waves
Heinz Baked Beans - The Who
Mary Ann With The Shaky Hand (excerpt) - The Who
Why Am I Treated So Bad - Julie Driscoll, Brian Auger & The Trinity
The First Cut Is The Deepest - P.P. Arnold
The fun began during Mary Ann With The Shaky Hand, which developed a shaky performance - skip-o-rama. Veered from late 60s Detroit material to late 60s Britain.

O Nosso Amor - Antonio Carlos Jobim/Luis Bonfa
Life Is A Carnival - The Band
Carnaval - Santana
Carnival - The Cardigans
Carnaval In Rio - Heino
Guess the theme here. This set ran smoothly and I thought all was well and good. Starting thinking ahead to a "fistful of 45s" segment. One hitch - discovered I'd forgotten to bring a disc of festive Brazilian tunes. Stevie D suggested the early 70s Santana track before I left TO, which fit beautifully into this set.

Silver Machine - Hawkwind
Les Filles - Les Sultans
Little White Lies - The Painted Ship
open Up Your Door - Richard & The Young Lions
60s-70s rock, starting to sneak in some CanCon. A couple of discs weren't liked by the newer CD decks, so there was a bit of scrambling to cue up tracks. Also discovered I'd forgotten to bring several more discs I'd made just for playing on this show - those tracks will have to wait until next time (mostly recent discoveries from the net).

I'll Keep Coming Back - The Guess Who
Keep On Running - Grant Smith & The Power
Stood Up - Sloan
When the shit started to hit the fan. I had planned to spend most of hour two playing 45s, either lesser-known B-sides of smash hits or long-buried singles in the station's 45 file cabinet. Strike one - there's only one 45 adapter. Strike two - it's slightly too small for either of the turntables. Strike three - try to make it fit, throw on the first 45 (an early Guess Who, B-side of Hurting Each Other), but by the end of song, the record is wandering around the turntable. Panic-striken, I grab the first CD at hand and throw it in the player. Sort of made things work for the Sloan 45, but decided to give up, as everything in the studio conspired against me. The mic fell, I tripped over the headphone cord getting out of the chair, log sheets flew everywhere, piles of CDs fell.

Boot To The Head - The Frantics
In a froth, I came close to a mini-meltdown on air, indicating all was not good...and I really wanted to give something a boot to the head. Luckily, I had a Frantics CD with me...

Don't Be Afraid - Howie Beck
Stab It & Steer It - Atomic 7
No One Has Ever Looked So Dead - The Organ
The last two reflected my blackening mood. After a long day, I started to feel dopey around this time. Hatched a plan to get myself out early, yet still fill the airwaves through 1 am.

Constipation Blues - Screamin' Jay Hawkins
Mothers of Invention bootleg, June 25/66
Please Don't Pass Me By (live) - Leonard Cohen
Hockey Night In Canada - The Shuffle Demons
After playing Constipation Blues, threw on two lengthy tracks to provide time to file away all station material I had pulled. Gradually cooled off, though items kept getting in my way.

On The Way Home (alternate version) - Buffalo Springfield
With a terse goodnight, threw this on, finished cleaning up, then hightailed it out. Trip home was a nerve-wracking affair, downpours alternating with maniac drivers and creeping fatigue. Had to get onto Eglinton when I reached the airport, finally arrived home around 2:30 and threw myself onto my bed.

One more to go...and it's got to be better than this one.
Scribbled at 12:36 AM No comments: Links to this post

This week, the Warehouse takes a moment to remember one of the greatest entertainers who ever lived, Mr. Max Monkey. Back in the early 50s, Max charmed audiences around the world with his unique piano jazz stylings.

Though he was best known for his boogie woogie tunes, Max was equally adept at mastering the newest sounds of the day. From 1947 to 1961, Max was one of RCA’s best selling artists –who has never seen a copy of 1959’s classic album A Monkey at Carnegie Hall?

The Max Monkey trio (Max on piano, Charlie Chimp on bass and Ollie Orangutan on drums) laboured on through the 1960s, until tragedy struck in 1963 when Charlie was killed in a banana truck mishap. The loss hit Max hard, which exacerbated a growing problem with the bottle. By 1966, Max was reduced to whatever low-paying gig he could find, and spent too much time hanging out with Chet Baker.

By 1968, Max had gone through rehab and was ready to take on the world again. Unfortunately, the world wasn’t ready to embrace him again, and The Groovy New World of Max Monkey flopped. He left the music business, embraced God and lived quietly until his death in 1974. 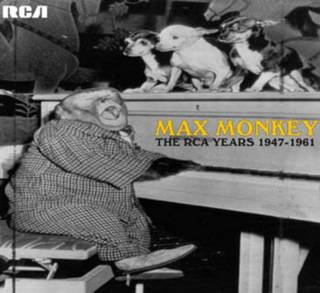 As Max’s legacy, the Warehouse is proud to offer at a special price several reissues of Max’s classic material from the 50s, on CD and record. Come down next weekend, when Max’s grandson Marcus proves talent runs in the family genes as he plays some of Max’s favourite tunes. You’ll swing, you’ll laugh, you’ll be astonished. Also check out our new Rent-a-Monkey department!
Scribbled at 3:06 PM 2 comments: Links to this post

goodbye 28, hello 29 (or one step closer to not being trustworthy)

Yeah, it's birthday time again, the last of my twenties. For some friends, this is a sign of creeping mortality, or fear days of youthful misadventure are coming to an end.

I'm a year older - hoohah. It's not physical or chronological age that matters, it's your outlook on life, a point proven way back in high school. My year wasn't the most exicting lot on the planet, especially those in my morning home room. They may have been 16, but already gave off the impression of being well into middle age - no crazy stunts, conversations revolving around duck hunting similar to old men, etc. Heck, I was pretty comfortable as a couch potato.

Ideas I had in high school I'm glad I didn't stick to:

University was a release, to see that it was OK to act a little loony. That failing a course was not the end of the world. That there are people out there who are willing to go places to do things, not sit around the house all day. It felt like adolescence and young adulthood had reversed themselves. I wasn't complaining (except that maybe I should have been bolder on the "fessing up to girls I really like" front - live and learn).

28 was a great year...finally saw a large chunk of North America, followed through on keeping a journal (weblog) regularly for the first time since pre-Ontarion days, developed new friendships, took stabs at the dating field, wrote a script, pushed my graphic design abilities, kept my boss happy, etc. If 29 maintains the same pace, I'll be a happy camper.

In the end, the key is to allow your mind to stay young, progressive and curious. If I evolve into an old fogey whose conversations are fixated on the weather and what a wonderful job the Reform Conservative Alliance is doing, it's time for the glue factory.
Scribbled at 9:22 AM No comments: Links to this post 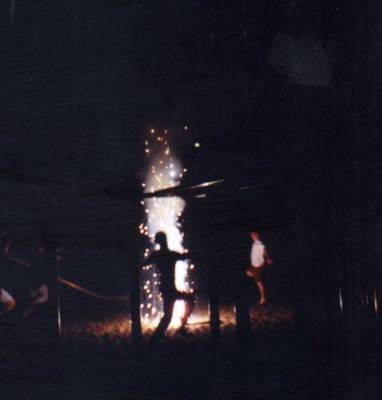 More fun with the BloggerBot. Dancing around fireworks in suburban Guelph on Canada Day, 1997.

Scribbled at 10:36 PM No comments: Links to this post

Like show #3, a smooth one, helped by a third CD deck added to the studio. Before going into the playlist, let's take a quick tour of CFRU as it looks in 2004.

Here's the main hallway leading to the studios, looking much neater than I remember (the ramp was installed back in the day).

What is a campus radio station without a door plastered with promotional stickers? See if you can find your favourite band in this picture.

One wing of the CD library, which appears to be in good shape these days. The record library is an environmental disaster, with platters scattered everywhere. There are still traces of the time I attempted a grand reorganization of it years ago - there are still stickers with my handwriting on the shelves.

Finally, the on-air studio, where the magic world of radio comes to life. You could accurately film a period piece in here, which is part of its charm (though you'd have to move the old cart machines back in - those were being used into the new millenium). Wonder if anybody still digs out archival reels - those used to be fun to play around with (I should check the archive room to see if one backup show I recorded for fun on reel-to-reel still exists).

For more information about the station, and a live stream, check out their website. Looks like there's special programming coming up for the annual Hillside Festival (where back in '99, I spent a fun day driving around musicians and their equipment and had a chance to mow down former co-workers I despised - but's that's a tale for another day).

The Prisoner Theme - Ron Grainer
Started withe the ITC theme, then rolled into this classic TV theme. Besides, it was on the same disc as the next track...

You Know What I Mean - Vernons Girls
Anyone Who Had A Heart - Dusty Springfield
Don't Be That Way - Ella Fitzgerald and Nelson Riddle
Ain't Got No - I've Got Life - Nina Simone
I Want To See The Bright Lights Tonight - Richard & Linda Thompson
Other than female vocals, no links between these tunes.

Hard Times - Baby Huey
If You Need Me - Wilson Pickett
Happy Go Lucky Girl - The Paragons
Bangarang - Stranger Cole & Lester Sterling
Help Me Make It Through The Night - John Holt
Come In Out Of The Rain - Parliament
A Curtis Mayfield production, followed by a Solomon Burke, a sidetrip to Jamaica, finally early P-Funk.

Bridge Over Troubled Water - Senator Sam J. Ervin Jr.
The Merry Go Round Broke Down/excerpts from "Porky In Wackyland" - Carl Stalling
What Is Love? - Anthony Quinn
Rosemary - The Dickies
The obligatory oddball set. Ervin was one of the key figures in the Watergate hearings, beloved for his folksy charm. The Quinn tune is one of the strangest odes to love ever recorded, though frumps will love it.

Well It's True That We Love One Another - The White Stripes
Daddy's Gonna Tell You No Lie - The Cosmic Rays
He Gives Us All His Love - Randy Newman
Show Me a Smile - Fleetwood Mac
The wind-down, mainly to play acts I'd named off earlier. The Cosmic Rays were a mid-50s doowop group produced by Sun Ra.

Earth To Doris - Was (Not Was)
This always felt like a good end-of-show tune to me.
Scribbled at 11:02 PM No comments: Links to this post