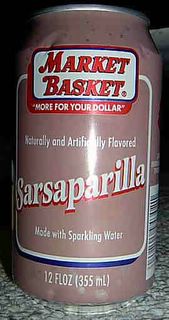 Package Notes: Bubbly motif, used on all Market Basket sodas. "Made with Sparkling Water", as opposed to flat swill drudged from a neglected New England harbour.

What's It Like?: Root beer, with a mellower taste than many brands of the foamy stuff. Market Basket also has cans of RB, but I neglected to pick any up for a direct comparison. Indistinguishable colour from RB.

Would You Buy It Again?: Yes, due to that mellower taste - it's easier to polish off a can of sarsaparilla than full-strength A&W or Mug.
Scribbled at 10:57 PM No comments: Links to this post

roadtrippin': drivin' down to syracuse

Toronto-Niagara Falls-Syracuse - 474.7 km
Lesson: if bringing a suitcase with you across the Canadian-U.S. border, such as checkpoints along the Niagara River, make sure you cut off all tags from your last trip, as the Amtrak tag from last year's visit to New York raised the guard's ire. Several questions were repeated, likely to try to catch me off guard. She also seemed ultra-curious about how much money I was bringing into the US. No sign of humanity whatsoever, furthering my theory that all guards along the Niagara border are partially cybernetic. 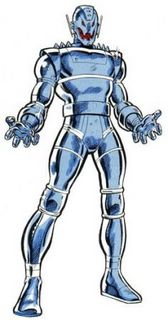 What border guards along the Niagara River look like underneath.

Limited myself to a quick stop at the outlet mall in Niagara Falls, where the trip's book blitz began. Walked out with a couple of cookbooks and a history of Our Gang/Little Rascals (yeah, I grew up with endless Sunday morning reruns of Mush and Milk and Our Gang Follies of 1938 on channel 4). Headed east on the NY Thruway, breezing along while burning my arms. Little did I know there'd be plenty of time for them to heal up... 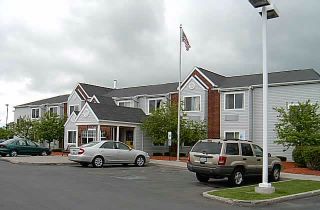 Arrived in Syracuse around 5:30-6, found a hotel room immediately at a Microtel off Carrier Circle, a giant roundabout adjacent to six million chains, except for the remnants of an ancient HoJo's at the south end. Microtels are basic but comfy, with a full cable package to make up for all that TV I don't watch. Cue a Chappelle's Show marathon on Comedy Central, along with mucho laughs from Fox News Channel.

The cookbook count grew, thanks to extreme markdowns at a Waldenbooks in a half-deserted mall (the only store I noticed much traffic in, apart from department stores, was a goth/RPG supplier). Also began the quest to sample products from every grocery chain along the way, with Price Chopper (no relation to Sobeys' "no frills" stores). Only picked up a can of soup, due to everything else requiring a loyalty card to get a discount. Rant to come.

Ended the day at Barnes and Noble, plotting out the next day's route with a new road atlas, to go with a book on cheesy late-night informercial products (GLH - Great Looking Hair - anyone?)
Scribbled at 8:58 PM No comments: Links to this post

Over the course of the roadtrip, I couldn't resist visiting most grocery store chains I came across. Let's just say the nuclear stockpile of food grew significantly. As a consumer service, the Warehouse Test Kitchen will review these products over the next few months, letting the public know if it's worth the trip to Massachusetts for sarsparilla or Quebec for "exotic" fruit juice.

First up, some homestyle goodness from Joisey... 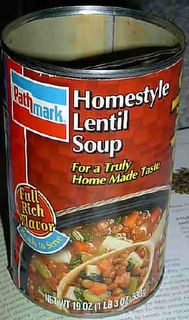 Package Notes: The folks at Pathmark are proud of their product. How so? Dig these directions:

"DO NOT ADD WATER. SERVE FULL STRENGTH, JUST AS WE COOKED IT."

It's much funnier if you picture these instructions in a New Yawk accent.

What's It Like?: different from most canned lentil soups I've tried, due to the chunks of potato and smoke flavouring. Borders on bean and bacon, without the little bits of bacon. Thick consistency, dark brown colour that may remind you of a body by-product. Definitely less vibrant than the soup pictured on the can.

Would You Buy It Again?: Yes. Tastier than most canned lentil soups, yet the smoke flavour isn't overpowering. Hearty another to be split over two lunches, would make a great sandwich companion.
Scribbled at 12:47 PM No comments: Links to this post

Just checked my phone messages and found a note from your friendly-neighbourhood Yanous, everyone's pal from Best Price Movers (yes, that's how he spelled it this time round). He wondered why I haven't called him back to move the piano (you know, the one that makes the music...dum-de-dum-de-dum...Yanous admits he can't play that tune). He also told me that if he wasn't around, I could talk to his pal Bisti, and that because "in this country, you have the big places", he'd always be there to help.


Anybody else get this latest Best Price message...and if so, do you think they moved beyond mere camp value with this one? - JB
Scribbled at 8:30 PM No comments: Links to this post

Pictures and stories from a trip with the family to the Glass City, Toledo, Ohio...

Our story begins just north of the Michigan-Ohio border, at the outlet mall in Monroe. At one time, this was a thriving retail centre, with three full sections. Today, only one is near-capacity, while only a Pepperidge Farm outlet and one other store remain open in the section shown above. The in-between section was torn down years ago. However, my Mom still has good luck at the remaining stores, so we haven't written off this "dead mall" yet.

This was our primary destination, the Libbey Glass outlet store. Located in one of Toledo's many failed projects to resurrect its downtown, this is the only part of the Erie St. Market one could honestly say is healthy (the outdoor market looked meagre, the indoor all but replaced by antiques).

Read more »
Scribbled at 10:30 PM No comments: Links to this post