An update on the Best Price Movers saga. After another break in calls, they've cranked up the phone mail spammer again. Big change - no more pitches from Boris/Janos/Reggie/Tugboat Bill. The past two calls have been a female voice, calling herself Anna on the first, a different name on the second (skipped through it, didn't pay much attention). These calls are done in a normal, non-phony accented voice, and have fewer vocal flubs than her male counterpart. No more "ahhhhs" or "ummmmms".

This doesn't change the fact they're still annoying, especially now that they're less amusing. - JB
Scribbled at 11:05 AM No comments: Links to this post

santa claus is coming to town

Met up with the gang for our yearly ritual of watching/mocking the Santa Claus Parade. This year's viewing spot: Bloor and Bathurst. Went down to meet everyone, but didn't immediately see them. After a quick phone call, discovered they were around the corner, on the opposite side of the street.

The crowd was thick, with little room to move. Right at the corner, movement came to a dead stop. I was squished in the crowd, more crowded than I'd ever been. Two people near me almost put up their dukes, because one guy refused to have his view obstructed for five seconds to let somebody through. Nobody got through, as more tried to push their way in both directions. If anybody had fallen, it would have been curtains.

It was nearly enough to send me back onto the subway.

Somebody finally pushed through and the crawl resume. Finally made it across the street and joined the others. It took awhile for the stress to wear off - when my camera was being temperamental, I flew into a steady stream of language not fit for children's ears.

But hey, it was a nice day.

Choice quotes from the peanut gallery. Those who uttered these phrases shall remain nameless (I didn't write their names down!):
"Hey, take a look at the rod!" - a float featuring a lazy-looking animal fishing, with a very long rod.

"It's an angry woman chasing those poor children...then she got caught in the star and lost half her body" - an accurate description of one float that passed, one that would have beem worthy of destruction in Animal House.

"Hey, it's the United Nations!" - a marching band carrying a dozen-and-a-half flags. We noticed the marching bands were over-enthusiastic this year, with the leaders honing their finest imitations of Robert Preston in The Music Man, with more gusto.

"More children to the fire!" - a float with a bunch of kids sitting in the interior of its midsection - don't remember for sure if it was the train advertising The Polar Express. Whatever it was, it seemed like an advertisement for child labour.

"Is that a business goth?" - on our way over to the Duke of York, passed a woman in black business clothing and very dark makeup. Soon, somebody coined the term "busigoth". Sounds like a idea to build a sketch around...

Suggestions for our own floats were tossed around, such as a tribute to alternative energy (buy tons of baking soda to use for an "erupting" volcano) or a crossing the Santa Claus and Pride parades (folks marching in nothing but Xmas skivvies). I wonder if Caribana has ever thought about lending floats/costumes... 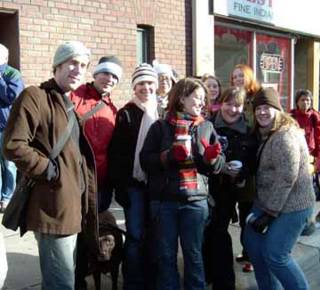 Hey, hey, the gang's all here...except for a couple off to grab some samosas. 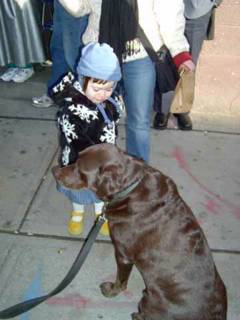 We kept running into cute kids fascinated by our merry band of freaks. This girl kept patting and playing with Tipper. She also patted Mark's leg, but we think it was her way of telling him to get out of Tipper's way. 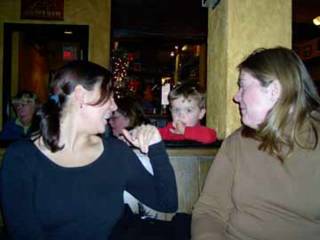 We ran into kid #2 at the Duke of York, after the parade. He quickly became Jess' new boyfriend. He also drooled his lunch into a mound of coats. The kid's ready for higher education.
Scribbled at 1:07 AM No comments: Links to this post

It's interesting where offhand remarks will lead you.

While driving Nile and Dee home after my last dinner bash, the subject of improving one's wardrobe came up. I guess Nile had been down about career prospects when Dee suggested that he might want to start with his wardrobe. After devouring several style books, he was born again, a man with a mission: to improve others like him.

Guess who said they'd offer to be a guinea pig, in light of recent dating blunders...

So it was with a mixture of bemusement and fear I hopped in the car with Nile and Dee the other weekend. Understand that I've been a conservative, relaxed dresser most of my life, happy with loose shirts and jeans. Sure, I owned a pink sweater during the height of Miami Vice, flannel during the grunge era, etc, but never dragged them out much. Fear of clothing shrink often led to buying clothes that didn't reduce in size, making me look bloated.

We headed out to the scene of his conversion, Orfus Rd. Located near Yorkdale Mall, Orfus is a place where you can experiment for very little, making it ideal for those on a tight budget. I'd only driven down Orfus a couple of times - once to explore, once to play laser tag (which I suck at, but was a lot of fun and a good workout). It's where insane drivers come out to play, struggling to find parking spots and avoid fender-benders. Given how much I love driving in our humble burbs, I hadn't set my sights on going out there again unless others were along.

I guess a couple of things were already working in my favour - my pea coat and what Amy likes to call my "bowling shoes". One thing I had to do - untuck my shirt. This was going to be a no-no. Later discovered Amy's been waiting to tell me the same thing, but didn't want to hurt my feelings. Trust me sis, they ain't gonna be hurt.

I let the style judges pick out stuff they thought would work on me. I wasn't too helpful at first, as I couldn't figure out what exactly I needed. In the back of my mind,I knew a couple of things:

1) For pants, I could still rely on good quality/low cost pairs from the States (good ol' Haggar)
2) Nothing "clingy", given my body shape

I didn't have to fear much, other than wacky sizing. First successful stop was a place called Target (no connection to Tar-zhay), where Nile stocked up on his last run.

Tried a number of shirts, most being too tight or roomy. Bought one, which I almost got for $4 until the cashier realized which rack it came from ($10). Lesson: don't look so puzzled when the price is lower than you expected.

Next: Le Chateau, a chain I had never looked in before. We had an unprintable name for it in high school - let's just say it was a centre that referred to torches. Was surprised to find some half-decent shirts buried at the back of the store. The salesperson didn't seem to mind going through several ceiling-high racks to look for sizes.

How wacky was sizing? I bought an XXXL shirt that was much smaller than a huge XL. My co-conspirators kept handing me shirts to take into the dressing room. Ended up buying two.

Net result of the day: three shirts, $40, brave new frontier.
Scribbled at 10:58 PM No comments: Links to this post

Email ThisBlogThis!Share to TwitterShare to FacebookShare to Pinterest
Labels: friends

We're back this year with more items available exclusively at JB's Warehouse. Remember - we're there to serve your gift-buying needs!

Undaunted, the folks in product research here at the Warehouse have come up with their own unique spin on carbonated beverages. Introducing JB's Own Handcrafted Fast Food Sodas!

Our researchers have also come up with these exotic JB's Handcrafted flavours:

* Mucus - when you want a taste of cold/flu season without the distraction of falling ill!
* Candy Heart - complete with floating messages, just like the candy!
* Pineapple-Glazed Ham - Perfect for Easter! Availale in Kinda Salty and Pump My Veins With Salt strengths
* Communion Wafer - approved by 5 out of 6 dioceses!
* Paczki - remember, you don't have to be Polish to polish off a paczki!
* Arsenic & Old Lace - fool your friends into thinking you're poisoning them! See if they mistakenly will themselves to death! Also available in Cyanide Slide!
* Double Shot Of My Baby's Love - we'll leave it to your imagination as to what flavour this creamy concoction is!
* Milli Vanilla - an imitation of imitation vanilla flavour soda! The drink for post-modernists!

We're still working on the final design, but here's a sample label! JB's Handcrafted Sodas
Guaranteed to Bring a Smile or Your Money Back
If An Accident Occurs, We'll Pay For a Stomach Pump! - JB
Scribbled at 6:23 PM No comments: Links to this post