This slice of "teen humour" was a space filler in a 1960s issue of Teen Titans that was so decayed that it accompanied a week's worth of the Globe and Mail and half-a-dozen cereal boxes to the recycling bin instead of finding its way to a Goodwill or comic book shop. Probably the most interesting element is the artist: Mort Drucker, whose work for National/DC was usually found in its war titles. At this point, he was also a decade into his run as one of the key artists for Mad, where he gradually became the chief artist for the magazine's movie and TV satires.

As for the comic itself, Siskoid's Blog of Geekery tells you all to need to know...or maybe all you really know is that the villain Robin, Wonder Girl, Kid Flash and Aqualad took on was a robot named Honey Bun. Honey Bun.

The Toros - Toronto's Other Hockey Team (January 26, 2012): adventures in the World Hockey Association.

The Loblaw Groceterias Building (September 13, 2011): the former head office of the grocery empire.

The Princess Theatre (April 20, 2011): a fire couldn't fell this theatre, but University Avenue did.

1909 Reduction Referendum (September 1, 2010): when the issue of reducing the number of licensed drinking establishments in Toronto was placed on the municipal ballot.

The Empire Strikes Back (July 28, 2010): a short history of Toronto's Conservative Party-owned newspaper, the Empire.

The Saga of Chorley Park (June 2, 2010): or how a government residence can go from showplace to crumbling ruin.

Fire at the New Jail (April 22, 2010): how bad luck plagued the construction of the Don Jail.
Scribbled at 5:15 PM No comments: Links to this post No words about this ad. Just sit back and enjoy a beautiful illustration.

Source: The Atlantic Monthly, January 1924 - JB
Scribbled at 3:01 PM No comments: Links to this post

bonus features: it's mainly because of the meat and more (1) I plowed through loads of material in preparing this week's Historicist column about Dominion Stores, which was in danger of turning into a 176-page book without pruning. There's so much material on the cutting room floor that there will more "bonus feature" follow-ups than usual—think overstuffed four-or-five DVD version of a movie.

Today's post zeroes in on the celebrations for the chain's sixth anniversary in 1925. Besides the ad above, the September 18, 1925 edition of The Globe carried two pages of food-related articles and congratulatory ads from Dominion's suppliers under a celebratory banner. Among the featured stories:

“Groceries at Lower Prices Are Sold at Dominion Stores Because of Large Purchases”
The longest article explains how Dominion uses its ability to buy in bulk to deliver lower prices (even if, as a government commission discovered a decade later, loyal customers were occasionally shortchanged in the weight department). The introduction ponders why customers don’t bother to ask how the grocer manages to cut great deals:

Read more »
Scribbled at 2:28 PM No comments: Links to this post A spacey, slightly creepy Bicentennial-era clothing aimed to make you smile at A. Smile. If the facial hair on the dude in the front fused into one strand, and his ponytail(s) were repositioned, he'd resemble 1970s comic book character Man-Thing. 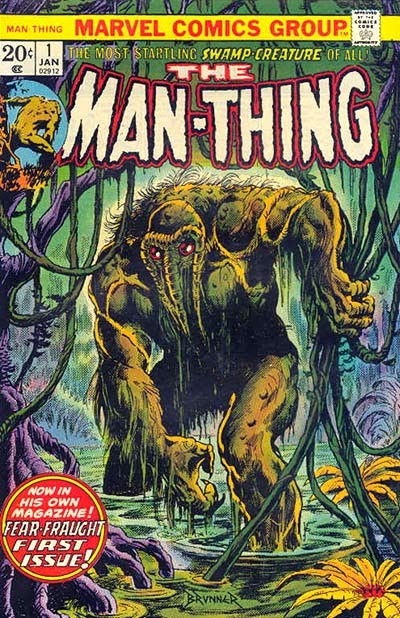 Scribbled at 2:54 PM No comments: Links to this post

merchandising department: how to sell cheese While researching an upcoming Historicist article, I flipped through a stack of issues of The Link, an in-house magazine for employees of Dominion grocery stores from the mid-1920s. Besides corporate gossip, inspirational poetry from the likes of Kipling, announcements of new store openings and updates on how recreational sports teams were doing, there was an occasional article on food handling and merchandising. Today's tips come from the July 15, 1924 edition. Remember: nobody likes dry Kraft cheese. - JB

Scribbled at 2:32 PM No comments: Links to this post

Just as the baseball season is moving into full gear, a round of lazy YouTube surfing resulted in three clips of the clubhouse celebration after the Detroit Tigers cliched the American League pennant on September 17, 1968.

From the following day's edition of the Toronto Star. I'm guessing that it wasn't the Star's sportswriting style of the day to place "the" in front of a team's name:

Tigertown is nursing a monstrous hangover today after a noisy horn-honking celebration of Tigers' first American League pennant since 1945.

You can hardly blame the celebrants. It was a long time between drinks.

By the scoreboard in Tiger Stadium, it was 10:19 when Don Wert stroked a wrong-field single to right field with the bases loaded in the bottom of the ninth inning to score Al Kaline with the winning run in the 2-1 triumph over New York Yankees.

But officially Tigers had been champions for 20 minutes. That was when Boston Red Sox completed a 2-0 shutout of Baltimore Orioles in Boston to clinch it for Detroit.

However, police had requested Tigers not announce the Baltimore score until the game was over here for fear of interruptions from exuberant fans jumping onto the field.

Even so, among the 46,512 witnesses who helped set a Detroit season attendance record were many with transistor radios to keep informed of happenings in Boston, and they started throwing debris on the infield as soon as it was official.

Wert's hit had barely hit the grass when fans started pouring onto the field. Police, carrying night sticks, and ushers tried in vain to keep the crowd back, and in no time they were pushed back to the Detroit dugout.

The only time the roar subsided was when a fireworks display was wheeled into centre field. The lights went out, and the fireworks spelled-out "Hudson's say sock it to 'em Tigers."


The lead reporter is George Kell, who, after a Hall-of-Fame career as a third baseman, called Tiger games from 1959 to 1996. At the start of the second clip, you'll see Kell interview his future longtime broadcast partner, Al Kaline. Kell retired after a serious illness—I was living in England at the time, and Dad suggested that I should send a "get well" note since I had watched countless Tiger games growing up. To this day, that note is the only time I've ever sent a fan letter via snail mail.

The home station for the Tigers at the time was WJBK (channel 2), who televised games from 1953 to 1974. Based on the ads in the third clip, it seems this copy may have originated in Kalamazoo, where Kell's booth partner Larry Osterman (the reporter in glasses) worked his day job at WKZO.

Bonus feature: Marvin Gaye sings the national anthem before game 4 of the 1968 World Series. Around the 1:00 minute mark, one of gentlemen in the crowd might be Jackie Robinson. The Tigers won the series in seven games. - JB

Scribbled at 10:56 AM No comments: Links to this post

past, present and pondering at village station restaurant A few months ago, we posted a lengthy advertorial from man-about-town Brett Halliday that lavished praise upon a new hotel. Further journeys through the back pages of the Toronto Sun have been rewarded with many more examples of his purple prose that inspire me to go the extra mile in my writing (within reason or for ultimate comedic effect). Whenever I read old Halliday pieces, I marvel at what unfolds before my eyes.

Before jumping into the "review" of today's restaurant, Halliday ponders a deep question about life that he had recently been asked:

When asked recently if I had my life to live over again, would I like to observe any changes, my answer was an emphatic no!

I have not lived through a war, experience depression, yet I have had my fair share of growing, struggling, and reaching a stage in life that has emcompassed a span of exciting events.

I have watched man stamp out disease, fly faster than the speed of sound, reach the moon, seen barren lands in Eastern countries turned into lush tropical areas of vegetation, met thousands of interesting people from Bangkok to the remote Isles of Greece, and literally been fortunate to view the wonders of the world.

We live in an age of harsh reality. Often frightening, yet most of the time, it can only be termed as exhilarating.

It is an age built to the future. Of youth as its thriving bloodstream of tomorrow, yet this is also an age of nostalgia, when we are using much of the past as a pulsating reminder of the present.

If I didn't know any better, I'd say Halliday is auditioning for a weightier writing gig, like penning public service announcements with a voice-of-God announcer investing each word with deep meaning over a slideshow of moon landings and stock travel footage to the soft strains of "Also Sprach Zarathustra."

Illusions of deep philosophical thought on the world around him descend from orbit during the next two sentences:

From man's most recent as today's exploits to the outer Universe, to my immediate fling of taking the opportunity to dine in the era of the Eighteen-hundreds.

It is also a season for value.

After a brief history of dining cars, the rushing tide of kudos bestowed on the restaurant's brilliant management team begins.

Read more »
Scribbled at 3:26 PM No comments: Links to this post

are you closed on good friday? While strolling along Spadina Avenue near Queen Street on Good Friday, we noticed a store that sent out conflicting messages about its state of operations that day. On the one hand, the doors were wide open. On the other, a piece of copy paper held in the middle of the doorway by a line of Scotch tape told passers-by there wasn't any reason to stop in. The owners should have used one more "very" to push the point across with no room for questioning. I was amazed the thin line of tape held up so well, unless there were gobs of it at either end hidden from public view. If someone was determined to go in and see what was up, unless they had a back problem it would have been easy to duck under the tape.

The sign doesn't answer a key question: if this store was very, very, very closed, why were the doors wide open? Was it:


Scribbled at 9:41 AM No comments: Links to this post

I may be developing a taste for grain-based dished stuffed into animal casings. First an annual helping of haggis, now, after a recent meal at Caplansky's Delicatessen, kishka. Sarah and I didn't steal one, though other items we had for dinner alongside it were criminally generous (howdy seemingly bottomless basket of fries that comes as a side with sandwich combos!). I liked the savoury kishka more than Sarah did, partly due to her mixed feelings about the smoked meat gravy (a side order of which was like getting a second sandwich), partly because it was stuffed in "derma," which sounded too close to "epidermis."

After another meal at Caplansky's on Good Friday, we think we may have settled into our standard orders: medium smoked sandwich with cabbage borscht (a sweeter, meatier version of the cabbage soup I remember my family buying at an annual Mennonite bazaar near Leamington during childhood) for me, salad with smoked turkey and an extra dollop of mustard mixed in for Sarah.

Scribbled at 11:14 AM No comments: Links to this post