Another year, another PPP-organized campening (not camping - that would imply we're hard-core campers) trip down to Guelph Lake. It was the fifth one for the girls, and my second. You can look back on my maiden voyage here.

The trip began by loading Dee and Tipper's stuff into the car. Tipper's a dog, the first time I'd ever carted one in the car, and she was well-behaved on the trip down to Guelph, with free reign over the backseat. We arrived at the campsite at sunset, leaving us to set up the tent in the dark (seeing how compact they are these days, I should pick one up next time CT has an employee sale).

I took a notebook with me and scribbled a few words:

2:50 PM, Saturday, August 21st
Rest time here at campsite 608. Tipper's just emerged from a quick dip in the water, in the lagoon next to the site. Dee's gradually turning red, Kiersten's taking a nap, Jeff's reading a book and Ken's flipping through today's Star. We're waiting for the imminent arrival of Jess, Mark and Nile. Just wrapped up lunch, some kebobs we picked up in St. Jacobs this morning.

Forgot to pack a few things for the trip. No pillow (used an extra
sleeping bag as a headrest last night, then bought one this morning). No beach towel (looks like there's plenty to go around).

Heard our neighbours well into the night, a bush party cranking out a CD of all-too-familiar 70s tunes. Try going to sleep with drunk chickies belting out Hotel California. Also nearby is an Asian bible group from U of T, who we heard singing this morning.

Megan had to leave this morning, to go on a golfing trip, which she wasn't looking forward to. All of us conked out early last night, before midnight, though it took Tipper awhile to settle down. Jeff was the first to drop dead, but then he'd been up for 40 hours straight.

7:05 PM - Middle of a round of Calvin rules croquet, getting sillier by the minute. Effects of booze starting to sink in for most of the crew. "Calvin rules" mean that each time a player sends a ball through a wicket, they introduce a new rule. Hence the breakdancing, belly biting, dog touching, running starts, movie quotes, Jerry Springer show titles and gratuitous references to "tranny c**k" (don't ask). Junk food intake increasing. Several others turned up to share in the fun, but aren't staying overnight. Dinner's on its way, with potatoes and corn buried in the fire pit. Only Tipper has ventured into the water. Megan just called, Jess has been handed the task of convincing her to come back. Tipper just took a dump on the croquet field - "it's pretty squishy tummy, there's no picking that up."

With that, Calvin rules drew to a close, by this point requiring victory laps from those still playing. We then dined until the sun went down, then sat around the campfire.


The crowd dwindled until the last bunch debated ethical dilemmas that started off sensibly, but devolved into hitting one's grandmother in the face for vast sums of money or shaking winos until they spewed for the same. I blame it on the time of the night and the mixture of booze, sausage and junk food in our systems.

Spent Sunday morning preparing to leave, fatigue having set in for all. Tipper may have been most affected - she wasn't wagging her tail or moving around much. Took a leisurely way back into the city, bringing campening to a close for another year.
Scribbled at 2:38 PM No comments: Links to this post

we can be geeks, just for one day 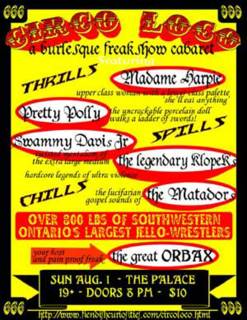 After missing a show a few months back, I finally got to see some fellow Arts House alumni in their latest venture, a modern-day take on the classic carnival sideshow. Ringmaster The Great Orbax started the show with a demonstration of how to hammer various lengths of nail up your nose without scraping brain cells, tossing aside cheesy jokes along the way. Down front was a crowd of designated hecklers mocking him at every turn. Also introduced was the old carny staple, the Wild Man of Borneo...er...Barrie in this case (though as far as some city dwellers are concerned, Barrie may as well be Borneo). Only one problem faced Orbax and the Wild Man - the daredevil act of prying open a plastic grocery store BBQ chicken container. It would have been easier to bite the head off a live bird.

Pretty Polly wore a china doll mask as she wielded, then lay upon, large knives, withput apparent injury. Psychibilly music from the Matadors followed, providing exercise for my toes.

I managed to get into the act - once directly, once indirectly. During intermission, wandered by a couple of the performers, heard my name tossed off at the end of a sentence...to provide a Moosehead to calm down the Wild Man. Managed to spill half of it on me before it was time to dash out. Thankfully there were no OPP patrols on the highway later on, even after I washed my hands.

As for the indirect...watching Mme. Harpie's critter-swallowing act, noticed the soundtrack was classic jazz. When Lambert, Hendricks & Ross played as critters were being downed, struck me it was the instant jazz library of discs I gave her last year that were being used. Cute set-up - she's in a stylish restaurant, with Orbax serving her various crawling specimens, in a genteel manner.

After she downed the closing goldfish cocktail, it was time to dash out. Could have stuck around for the jello wrestling, but I wanted to make it back to A'burg before sunrise. The ride back was the opposite of the torturous drive post-radio show. Smooth sailing along 401. with no maniacs and no drowsiness. The trip was three times long than the other night, but felt much shorter. Lesson - ya gotta crank 60s garage rock to get you through the night.
Scribbled at 9:29 PM No comments: Links to this post

Last radio show of the summer run, ending on an up note. Only one tech snafu (open a CD player in the middle of a tune), a few requests, and no dopeyness on the drive back. Once again, Friday the 13th proves a good day.

Walk On By - Isaac Hayes
Cool It - Wayne McGhie & The Sounds of Joy
Can You Get To That - Funkadelic
Still needed to get myself organized, so I threw on the longest track I had with me. Also noticed I was in manic DJ mode, talking louder, deeper and more "frantic" than usual...and having a ball.

Coolest Little Monster - John Zacherle
Night Of Fear - The Move
Drivin' Nails In My Coffin - Ernest Tubb
Yummy Yummy Yummy - Julie London
The "Friday the 13th" related set. Attempted Count Floyd imitation after the Julie London track. True, it doesn't have any fear-related elements in the title (the stretch I used to include the Tubb track)...it's scary in a different manner.

Harry Irene - Captain Beefheart
A Good Flying Day - The Sadies
When You're Next To Me - Mitch and Mickey
Kaze Wo Atsumete - Happy End
Hully Gully Fever - Rudy Ray Moore
I Only Have Eyes For You - The Flamingos
Mixed bag to end hour one. Happy End was accidentally ejected near the end of the song, prompting a quick switch to the Moore track.

It's My Pride - The Evaporators
Hour two kicked off with this revved cover of an early Guess Who garage-rocker.

Just In Case You Wonder - The Ugly Ducklings
Looking At You (A2 version) - MC5
I'll Feel A Whole Lot Better - Four Of Us
Friday At The Hideout - The Underdogs
Frenzy -The Fugs
Mr. Pharmacist - The Other Half
60s rock set, leaning towards garage rock for most of it.

Zydeco Express - C.J. Chenier
Make It Easy On Yourself - Burt Bacharach
Stuff Up The Cracks (vinyl version) - Mothers of Invention
The Dog Breath Variations - Mothers of Invention
As I was preparing to start packing up, the request line lit up like mad. Results: the Chenier and Mothers tracks, along with extending the show past 1 AM. Final proof a few insomniacs were listening.

Karma Police - Radiohead
Ended the show with this, since it's been floating in my head for the past few weeks - not sure why. Maybe I was losing myself on the air, though in a fun way.

And so ends this summer's resurrection as a DJ with an ongoing show. I've been given several offers to continue on, but I suspect I'll have a busy fall and do't want to drive out there all the time in the winter (one of the risks of locking myself into a full-time gig an hour from homebase). Still, when time permits, I'll check out to see if I can do the occasional fill-in, maybe work out a similar arrangement next summer.

If you'd like to sample CFRU's programs, go here...but wait until after the Olympics, due to licensing issues with the BBC.
Scribbled at 12:17 AM No comments: Links to this post

how to handle bratty kids at an indian lunch buffet

Went out for lunch to the new branch of Siddhartha at Yonge & Eglinton, a major improvement over the previous tenant (Bombay Host, which had the blandest Indian spread I've ever tasted). Seated nearby were a couple of yuppie-ish mothers and their bratty kids. You know, the type who smile and think it's cute when their little darlings run amok. They screamed, ran around other tables, etc. At one point, they told a couple of guys who wanted the window seat next to them that the kids (and their strollers, which the kids appeared too large for) needed space.

For once I saw a restaurant take action.

The mothers had decided to share their buffets with the kids, getting them small plates of rice, which the brats proceeded to toss on the seats and floor. Something happened which caused them to call a waiter over to clean up the mess.

Not sure what happened next, other than the manager came out and the
mothers weren't happy.

"How can you make us pay? They're just children, you know. Nobody else does this to us! They're only children! All places should be child-friendly! Why don't you have high-chairs?"

Seems they were going to be charged full buffet price for the mess the little darlings made ($7.95). Noticed a few smiling faces at other tables as the drama played itself out. The moms and kids soon left, bumping and blocking other diners, vowing never to return.
Scribbled at 10:32 AM No comments: Links to this post 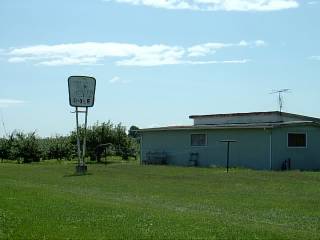