the new wonder woman is here!

By 1968, Wonder Woman was long overdue for a major revamp. Over the decades since her introduction in  1941, the edginess that marked her early years (especially the kinkiness slipped in by creator William Moulton Marston) had been watered down. Her rogues gallery was nothing to write home about, from boring baddies like Angle Man to the bizarre, not-at-all-racist Egg Fu. An attempt to revive the character's 1940s look had faltered. Her dowdy alter-ego, military secretary Diana Prince, just wouldn't do in a Vietnam world.

Cue makeover. Writer Denny O'Neil and artist Mike Sekowsky shook up Wonder Woman's world with a series of changes that transformed her from a star-spangled heroine into an Emma Peel-inspired protagonist: 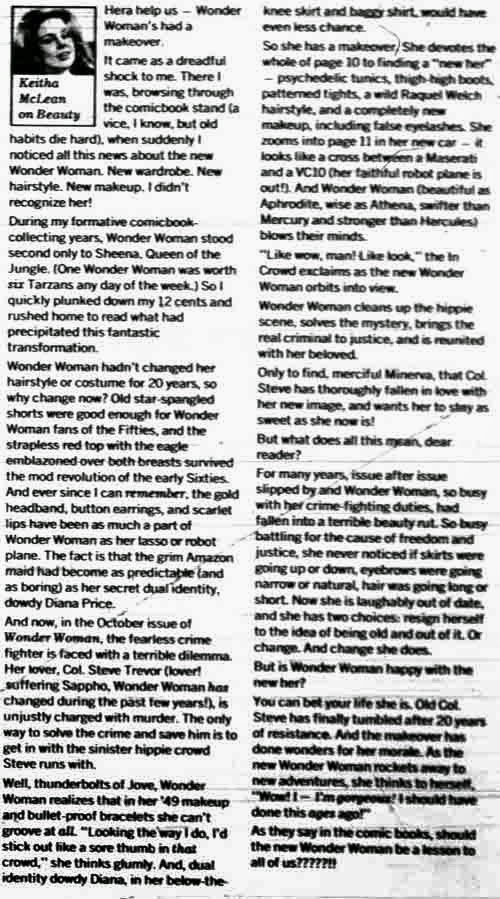 The launch of the makeover in late summer 1968 prompted Star Weekly beauty columnist Keitha McLean to discuss the changes to the iconic superheroine.

This phase of Wonder Woman's career lasted for the next four years. Towards the end of this era, further experiments were tried, from blending fantasy author Fritz Leiber's Fafhrd and the Gray Mouser characters into a battle with a weirdly-attired Catwoman, to a special "Women's Lib" issue written by Samuel R. Delaney. Ultimately, the reset button was hit, and by 1973 the status quo was restored.
Scribbled at 8:51 AM 1 comment:

November 15, 1954: the day Torontonians began enjoying two long-running comic strips, courtesy of the Telegram. Peanuts (whose local debut I wrote about for Torontoist) had been gaining popularity across North America since its debut four years earlier, while Marmaduke began causing mischief that year. Both strips migrated to the Toronto Star when the Tely folded in 1971.

Peanuts is regarded as a comic strip classic; Marmaduke is admired for its longevity (creator Brad Anderson is still alive at age 90). The Great Dane's monotony has led papers to try and drop the strip--an act they don't always succeed in carrying out. When the Star attempted to dump it in 1999, readers revolted.

When people like, as the Star put it, the same two jokes told over and over again ("Marmaduke is a dog with some human qualities, and Marmaduke is gargantuan"), it's comfort food they will fight tenaciously to hold on to. Reader protests to keep certain strips alive has led to plenty of zombie panels on the printed page of series whose expiration date was decades ago, and fueled a cottage industry of websites mocking those legacy strips.

Additional material from the February 3, 2008 edition of the Toronto Star.
Scribbled at 10:57 AM No comments:

August 14, 1947 was a busy day on the global history front. British rule in India ended, as the subcontinent anxiously prepared to split into the new nations of India and Pakistan. In Germany, 22 former attendants at the Buchenwald concentration camp were sentenced to hang ("22 NAZIS TO DIE FOR ATROCITIES" screamed the Star's main headline). In Tel Aviv, violence between Arabs and Jews escalated, leading to fears, according to the Globe and Mail, of "the worst racial conflict in the Holy Land since 1939."

At home, Torontonians endured a week-long heat wave which was blamed for causing two deaths that day: a 60-year-old man who suffered heat prostration and was pronounced dead on arrival at St. Mike's Hospital, and another man who died at his home on Lauder Avenue. Temperatures hovered between 90 and 95 degrees Fahrenheit around the province, and were accompanied by high humidity. The heat caused factories to close early. In Ottawa, government offices closed at noon. Low water pressure affected cities like Hamilton, Kitchener, and Peterborough. Dairy farmers near St. Thomas feared that dry pastures was responsible a 15 percent drop in milk production.

Amidst the gloom and doom, the front page of that afternoon's Telegram offered a ray of hope...to non-vegetarians, at least.

The next morning's Globe and Mail contained further details. While Canada had fallen behind on its commitments to supply Great Britain with millions of pounds of meat, the federal government felt the situation had improved enough that it was wise to let the Canadian public go hog wild again. It also appears the restrictions were primarily on red meat; eggs, fish, and poultry appear to have been exempt, disappointing those with cravings for thick steaks.

Anyone who expected immediate gratification was disappointed.

There will be little meat served in restaurants today because most eating places prepare their menus ahead of time, Norman Kirby, a director of the Canadian Restaurant association said last night. He said that the serving of meat courses will become general next Tuesday [August 19, 1947].

Consumption of fowl is expected to take a drop of 10 to 15 percent, now that restaurants are out of the meatless category. According to several restaurant owners, the public has become accustomed to eating chicken and other fowl, and the drop in consumption may not be higher than 10 per cent.

I wonder if diners who grew used to eating chicken during the war may have helped play a role in the success of a Toronto restaurant which launched in the early 1950s--Swiss Chalet.

With such a great headline like "NO MORE MEATLESS DAYS," you'd expect the lone front page picture on the Telegram to show a snappily-dressed diner tearing into a massive steak, a look of ecstasy covering their face.

OK, perhaps pictures of Ontario residents wilting in the heat?

Nope, that was the next day's Globe and Mail.

Pictures of Muhammed Ali Jinnah and Jawaharal Nehru to mark the birth of two new nations?

Nope, that was the next day's Star.

If you do the math, "Millionaire Sam" was only four years younger than the Tely itself. I wonder if he found the night watchman job he desired for his final years (unless it's a joke). Unless they opened convenience stores or expanded their hawking into a storefront newsstand, it's unlikely any of the younger men entering the newsboy field in 1952 enjoyed careers as long as Mr. Samuels.
Scribbled at 10:20 AM No comments:

It's Museum Week on Twitter this week, which prompted me to sift through my "Future Story Ideas" and "Misc" folders to see if anything relevant lurked about, waiting for its moment in the sun.

I found this: an article published in the Globe in 1932 declaring that, based on a report conducted for the Carnegie Corporation, Canadian museums were boring. Read deeper and you'll find greater complexities. Some institutions were getting off the ground; others suffered from a lack of endowments. Old models such as rooms tucked away in the middle of a university, lingered on. Only a few museums were "well worthy of the towns in which they are situated," such as the Royal Ontario Museum, which was undergoing an expansion along Queen's Park when this article was published.

Read the full article below to discover the extent of "paralytic modesty" in Canada's museums of the early 1930s. 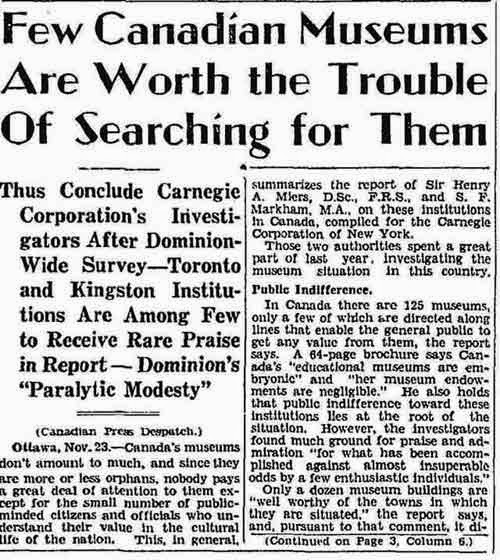 chatting before the wild party 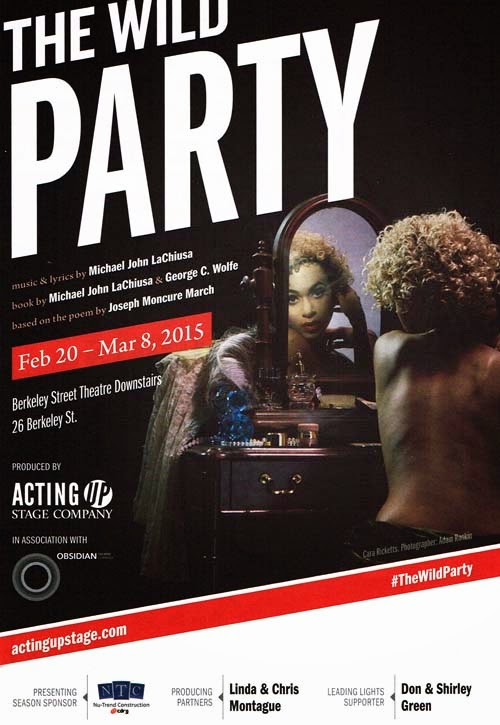 During the recent run of Acting Up/Obsidian's production of The Wild Party, I was invited to give a pre-show chat prior to three performances. I split the talk into two sections: the black community in Toronto during the 1920s, and a brief look at vaudeville in the city during that decade.

Among the weddings detailed on the social and women’s pages of Toronto’s major newspapers on July 29, 1926, regular readers might have noticed something unusual about one of them. As the Toronto Star’s headline put it, “Toronto Jamaica Folk Attend Smart Wedding.” The Star, along with the Globe and the Telegram, covered the union of merchant Joshua Michael Williams and Rachel Adina Stephenson. Perhaps the most remarkable thing about the coverage is that, apart from references to the couple’s West Indian origins, it could have passed for any other society wedding. For example, Ms Stephenson was “charmingly gowned in white satin, with the cap of her embroidered net veil banded with orange blossoms, carried a shower bouquet of Ophelia roses and baby’s breath. Miss Gladys Bramwell, the maid of honour, and the five bridesmaids wore gowns of pink georgette, with drooping pink hats and carried bouquets of delicate pink rambler roses.” Also provided were what the guests and child ringbearers wore, the music played as the couple walked down the aisle, and their honeymoon destination (Niagara Falls). Had it not been for the picture printed of the marital party, you’d almost be unaware that the participants were black.