at the coffee house

Found this cartoon while researching this weekend's edition of Historicist. I can sympathize with the frustrated diner -- a couple of months ago a friend and I experienced a lengthy delay at a Corktown brunch spot we had liked. Over an hour passed before we discovered our order had slipped through the cracks.

Usually the 100-year wait while dining in Toronto is for the bill. I usually dash to the cash when it's time to go, regardless of the grumbly looks this occasionally inspires.

This post provides supplementary material for a Torontoist article about the evolution of Toronto's pinball machine regulations, which you should read before diving into the following text.

I began my research for the article by going back to the 1930s, when guardians of morality began pressing to curb or eliminate pinball machines. On my first run through the Star archives, one of the earliest references to pinball I found was on the kids page of the May 5, 1934 edition. Problem: it wasn’t the pinball I was looking for:

past pieces of toronto: the paradise cinema

From November 2011 through July 2012 I wrote the "Past Pieces of Toronto" column for OpenFile, which explored elements of the city which no longer exist. The following was originally posted on January 29, 2012. At this point, the column went from biweekly to weekly. This entry also seems like a good one to repost now with news that the Paradise has been sold. Personal story: the first time I went to the Paradise was to see Robert Altman’s Nashville. The print was faded, but watchable; my seat was in rougher shape. The armrest was barely attached to the rest of the chair with either duct tape or chewing gum. While some people would have hightailed it to the nearest theatre with stadium seating, the improvised fix gave the Paradise a certain charm.

Opened around 1937, and known for a time as the New Paradise, it was a neighbourhood cinema that served the community around Bloor Street West and Westmoreland Avenue. Notes in the City of Toronto Archives indicate the Paradise suffered from its share of mishaps in the projection booth. When the theatre was built, it was quickly discovered the projectors were not aligned with the portholes looking out into the auditorium. In a letter to the Motion Picture Censorship and Theatre Inspection Branch, manager L. Jefferies reported that during the screening of the serial Daredevils of the West on December 9, 1943, “the film broke at a notched sprocket hole causing one frame to burn through the aperture. The operator was right beside his machine and, without the aid of a fire extinguisher, was able to stop the film from burning any further and, inside of one minute the picture was again on the screen, the projection machine not being damaged in any way.”

The Paradise passed through numerous hands over the years, including the Odeon chain. It appears to have closed briefly in the late 1950s, and was described as “junky and musty” after it reopened. It ran Italian films in the late 1960s and survived a fire in 1969 that required firefighters to cut two holes in the ceiling (it reopened within days). By the 1980s, as Eve’s Paradise, the theatre was a late convert to the trend of older cinemas-turned-porn houses.

When the Festival rep house chain took over in 1990, $250,000 worth of renovations were made that included fresh paint, reupholstered seats and the installation of a larger screen. The new operators promised “alternative and offbeat first-run films for people who think,” starting with Pedro Almadovar’s 1982 comedy Labyrinth of Passion. Toronto Star movie critic Henry Mietkiewicz felt the Paradise should have reopened with a more worthy flick than one from a filmmaker he referred to as “that Spanish schlockmeister,” but decided that the soft-core elements of the film were “perversely appropriate to the theatre’s recent past.”
On June 30, 2006, the screen at the Paradise went dark for the last time. A variety of problems, ranging from competition with DVDs and glossier theatres to owners considering retirement from the business, were cited for the closure of Festival Cinemas. While the Fox, Kingsway, Revue and Royal found new operators after varying lengths of inactivity, and despite an attempt to revive it in 2009, the Paradise remains shuttered. As long as the building remains intact, there’s always the possibility future cinemagoers will discover what miracle substance is holding their seats together.

Additional material from the August 17, 1990 edition of the Toronto Star. Photo of Paradise Cinema taken June 20, 2006 before one of its last screenings, Dr. Strangelove.

In honour of today being the 12th day of the 12th month of 2012, here’s a roundup of front-page headlines from a carefully selected batch (as in those I could get my hands earlier this morning) of Toronto newspapers the last time the calendar read 12/12/12:

The only paper to acknowledge the significance of the date, which it called “a gala day for puzzle fiends and people of the class of who travel one hundred miles to see a century plant boom.” 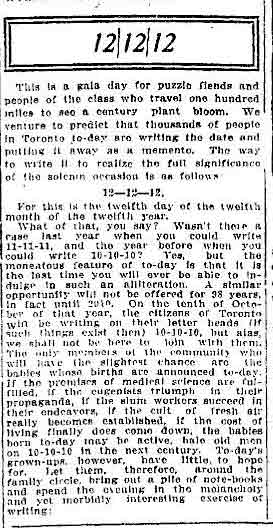 The Star also wins the best headline of the day: “THE KING AND YONGE CORNER HAS BECOME A GUSTY SPOT.” Recent gale-force winds added to the problems of crossing King and Yonge in the shadow of one of the city’s first skyscrapers, the Canadian Pacific Building. “Ladies making the crossing looked in some particulars like the pictures of fishermen’s daughters down on the stormy strand, when they have lost hope for their loved ones in the fishing boats out on the raging seas.” The wind tunnel effect was so bad that a gust lifted a bicycle and dropped it in the middle of the road, where “it was rescued from a hungry trolley car.”

“WOMAN BEATEN TO DEATH IN HOME AT CEYLON, ONT.” – With the subheadline “SON SAW A STRANGE MAN IN VICINITY NEIGHBOR INTIMATES SOMETHING TO TELL.”

“LAURIER ADVOCATES A CANADIAN NAVY WITH FLEET ON BOTH OCEANS” – The pro-Liberal paper claimed that the rush to hear federal opposition leader Sir Wilfrid Laurier speak about recent naval policy “beat anything that had been seen in years. The police and gallery officials were driven half out of their wits to control the crowd which gathered. Women in furs and jewels were packed like sardines outside the gallery door an hour before the bells rang.”
Read more »
Scribbled at 11:45 AM No comments: