A couple of graveyards have mysteriously popped up a few blocks west of my bunker, such as this one. Since I didn't feel like sticking around the house last night, I drove around the city to see what folks were wearing this year. I intended to snap some pics, but failed to get any decent shots. The best of the lot was this test shot while waiting for two lanes to merge into one on Queen West. There was one factor I hadn't accounted for. Last time I was downtown on a Halloween Saturday night, Church St (and other streets, for all I know) was closed so that everyone had more room to mull around. Not the case this year. I suspect the current police job action played a role.

From the comfort of my car, these were the highlights.

Church St - half-a-dozen drag queens in full Wagnerian regalia. Maybe they were off to audition for the Bugs Bunny part in a remake of What's Opera Doc? Also noticed the two styles of costumes that reigned across the core: ancient Egyptians and pirates.

Peter St - the most impressive Egyptian of the evening was seen here, a guy wearing a towering Anubis mask.

Kensington Market - no Egyptians or pirates here. What I saw were several folks in 1950s-60s Latin American revolutionary gear, complete with fake beards. Take note of how many people come/came to your Halloween party as Fidel Castro, c. 1959.

College St - back to Cleopatras and buccaneers. Standout was a couple as Spy Vs Spy - a male black spy and female white spy (though no grey spy in sight). Looked like they had some trouble holding their long-paper masks against the wind. - JB

My theory about Church St was wrong - should have looked at the city events calendar first (or Spacing, for that matter).

Today's Toronto Star (you may need to log in) has an article on how Halloween shows the differences between Canadians (we have fun) and Americans (the religious right thinks it's an evil day that promotes paganism).
Scribbled at 9:52 PM No comments: Links to this post 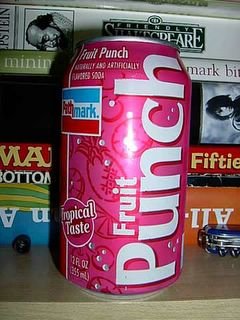 Package Notes: Dark pink can promises "tropical taste". Drawings of pineapples and cherries in the background. Drink itself is light red in colour.

What's It Like?: In the battle between the natural and artificial flavours noted on the front of the can, the latter wins. Overly sweet, tasting closer to bubble gum than tropical fruit. Dumped it down the drain after a few sips. Stains tongue but good.

Would You Buy It Again?: Doubt it. It was like going to a bad luau where everything is made out of sub-dollar-store plastic. - JB
Scribbled at 10:21 AM No comments: Links to this post

Dad was right about most things, right up to the end.

While on his deathbed nearly five years ago, one of our last conversations came around to a new guy Amy was dating. I admit, I wasn't always the most supportive brother when it came to earlier relationships, mostly because they tended to be short-lived (or were guys she eventually mocked too). I hadn't met Gavin yet - they'd only been together about a month and I hadn't heard too much about him. Dad told me to be kind, as he sensed she might have found the right guy.

He was right. Again.

Gavin fit into the family quickly. At Dad's funeral, several people thought he was a relative, as some of his facial features vaguely resembled ours. As time passed, everyone figured it was a matter of time before Amy and Gavin tied the knot.

Except for their first photographer going bankrupt and a change in best men, the preparations for the wedding went fine. Amy avoided going bridezilla and one could notice her smile widening as the day approached. It would be a small affair, mostly relatives or friends of our parents. A mini-family reunion, we joked.

I stayed out of most of the lead-up, due to distance. Most of my duties were on wedding day, walking her down the aisle and keeping the reception flowing. My tux was hit with most people, and I'd likely go with something similar if I ever walk down the aisle, unless future wifey has other ideas.

One weird event before the wedding. The flower arranger usually posts on a billboard outside the shop the marriages she works on. For example: Before their names went up, there was only one couple...Nancy and Jim. Our parents names. Eerie. Strange. Coincidence, an unearthly message or somebody messing with our minds? By the limo in front of Mom's house.

The service was held at Wesley United Church, across from A'burg's Canadian Tire. I'd only ever seen the back part of the building, when Amy was a Girl Guide, so it was surprising to see how large the actual church was. Amy and Gavin worked out the ceremony with Rev. Kirby (his first name, but that's what everyone used), so that it leaned towards humour, not holiness. 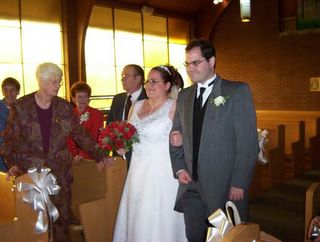 Leading Amy down the aisle.

The smile never left her face the entire day. Most had never seen her so happy, so beaming. A very good sign. About to say I do.

After the ceremony, the main party headed to the photographer's studio, out by Fox Glen Golf Course (Essex Rds 8 & 9, for those looking at a map). Spent a couple of hours modelling for the camera, with conditions the photographers loved (slightly cloudy, one tree on the property blazing red). The butterflies in my stomach grew frisky as the reception approached, as I was a little nervous about speaking in front of everyone. The chocolate almonds at the photographers helped.

Relax folks, I survived, as did everyone else who went to the podium. Speeches were brief, as I remembered that at the last family wedding we attended, Amy and I slipped out in the midst of a droning ramble to see if the hotel pool was still open. No such option for the audience at the Verdi Club. The happy couple showing off their rings? Not quite. While that's Amy on the left, it's our cousin Blake (father of Heather, the bridesmaid)
showing off his ring. The wedding cake, complete with young Marge and Homer toppers. 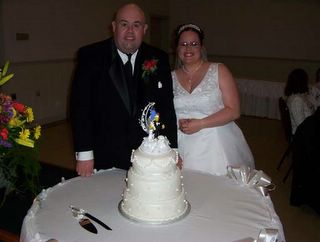 Gavin and Amy prepare to cut the cake... 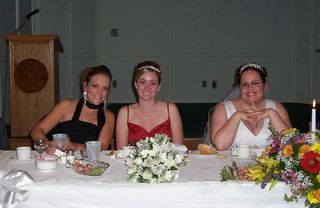 The bridal party at the head table. 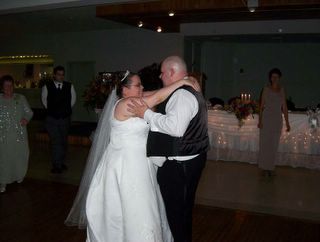 The first dance...We've Got Tonight by Bob Seger.

They chose all of their music, packing it into several folders on a DVD, each fitting the different moods of the evening. It was fun to see who was energetic and who wasn't on the dance floor. Mom's cousins Buzz and Kim burned up the floor all night, while my Mom's neighbour was Amy's energetic partner for the early fast numbers. I wandered from table to table, with conversations ranging from my high school drama classes (my teacher gave the dinner grace, with a nod to Dad) to tales of what the Horseshoe Tavern was like in the early 70s.

The night wound down around midnight, as the newlyweds headed off to spend the night near the top of the Windsor Hilton. I joined them the next morning for brunch and they were still glowing. Later, we returned the tuxes, split off for a bit (Amy and I ended up buying muffins for Mom at a Costco open house, then picked apples near Harrow), then met back up at Mom's to open cards and wolf down leftovers. Let's just say they could have used a tote board to count up the cash they received...

For more pics, see my Flickr site. As for the pics above, you can click on the smaller ones for larger versions. The joy of mixing your photo programs!- JB, some photos by GT
Scribbled at 8:14 PM No comments: Links to this post 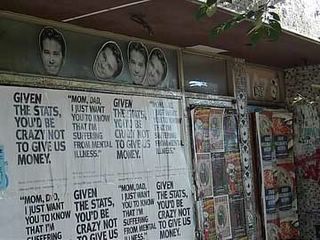 Before heading off to the final two segments of Croft St, we duck onto Harbord to look at one of the remaining colonies of Val Kilmer heads in the city. 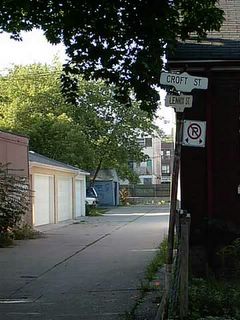 Looking north at the entire length of segment #2 of Croft St, running from Lenox to a short alley that leads to Borden St. Lenox St's most noteworthy feature was the Bathurst subway station-themed mural at the NW corner of Bathurst, recently painted over. No more concerned female commuter or old guy leafing through a copy of Fantastic Four #1. The mural had been deteriorating, so it wasn't a surprise to discover its days were numbered. 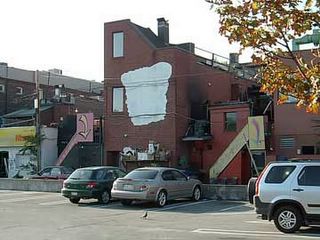 The rear of various businesses along Bloor. Note the obsession with arrows. This alleyway starts around Robert St, then turns into Croft. Looks like there's plenty of parking. 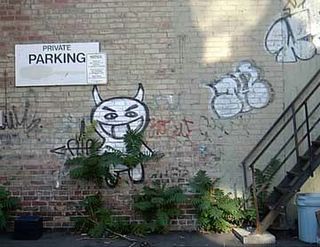 A devilish figure welcomes you to the last segment of Croft. 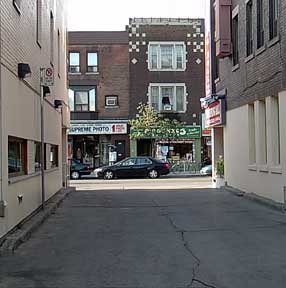 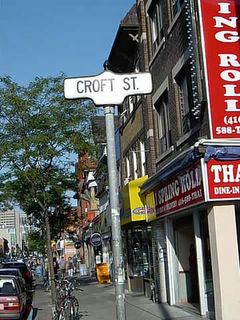 We've reached the end of the line. Given how many times I've seen this sign appear/disappear over the years, I wonder if it's one of most swiped street signs around town. How long before one of the new "Frankensigns" pops up? (if one does, hopefully with a neighbourhood banner - much more attractive than the standard bloated version...but that's a rant for another time). 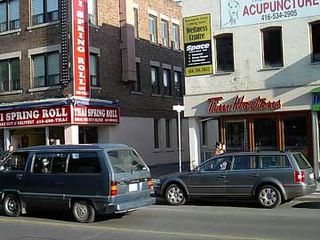 Our last shot is taken from the north side of Bloor, showing the businesses that welcome you to Croft St, a Thai restaurant and Tim Horton's. - JB
Scribbled at 6:36 PM No comments: Links to this post 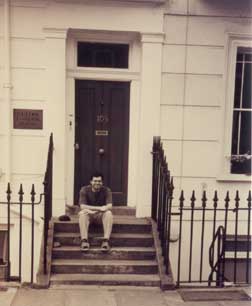 Sitting outside of Guelph London House shortly before returning to Canada, April 1997. - JB
Scribbled at 12:02 AM No comments: Links to this post

Tennis has never been a sport I followed closely. For my football/basketball/baseball-fan father, it ranked down there with golf and bowling as sports to watch on the boob tube. I didn't pick up a raquet until high school gym class and proved spectacularly inept. Matches were over in 30 seconds.

When Jess offered up tickets to a Davis Cup doubles match up at York, it was hard to resist. Another new experience, an afternoon with friends, etc.

Truelove, Janine and I landed good seats, close to the court. They were also directly in the sun. By the start of the fourth set, our faces had started to turn a nice shade of red. We fled to a shady section of the stands for the nail-biting final set.

Canada, anchored by Daniel Nestor and Frederic Niemeyer, went down to the wire to beat Belarus in four sets. You could feel the tension in the stands as the teams went into the tennis equivalent of sudden-death overtime.

The stands were livelier than I expected, with patriotic cheers all around that resulted in many hand signals from the court judge. Only the stadium organ was missing. Belarus had a small but loud following, deafening the stadium with their noisemakers. Everyone received "cheer sticks" at the entrance, long balloon-like objects than "banged" when smacked together. Great fun for drumming on the seats. I received a faulty set, as one kept deflating (the other week was still in good shape when I took it out of the trunk a week later).

Turned out I picked the right day to go, as Canada split the first day of singles, then lost the final matches. - JB
Scribbled at 3:20 PM No comments: Links to this post

Is this where west end girls hang out in Toronto?