one fine evening at ikea Spent some time at the Ikea in North York earlier this week, helping my friends Paul and Sheila take home a new coffee table and other goodies for their place, while I pondered future additions for my apartment. One of the first items we saw was this lovely fold-out chair. Makes one look like the honoree at a funeral. Other items were much better for diving into. A little known fact: the shelving department is home to one of the area's finest selections of high-quality Scandanavian literature. Can anyone provide a translation of the title of this fascinating book? Left: Checking out the VIP kiddie slide, which provides a very slow descent for adults. Hard to resist the cool kids stuff they have, including wall lamps I've seen in more than a few adult dwellings.

Right: a quick conference to assess the state of what to look for downstairs. Before heading down, we put little Octy to bed. When we saw him attempt to perfect his Alien facehugger imitation by jumping from one customer's head to another in the office department, we knew it was time for the kid to call it a night. Another little-known fact: Ikea is ideal for odd Halloween costume ideas, especially when they're 99 cent wall funnels. It's never too early to start planning! Fashion designers may also wish to take note. After a busy evening of shopping, time to take it easy with the patio furniture in the self-serve area. On the way out, we nabbed the last two hot dogs of the evening, leaving last-minute tube steak connoisseurs out of luck.

I accomplished a major achievement that astonished the others: I walked out of Ikea with empty hands. Not that I wasn't tempted, but I figure any major purchases can be put off until later this summer, since I figure it will take that long to either conduct a CD purge or finish unpacking the remaining boxes in my kitchen (I want to place either shelving or a second prep area where junk now sits).

We managed to fit coffee table and passengers into the official Warehouse vehicle, even it the backseat occupant had a higher-than-normal view.
Scribbled at 12:01 PM 1 comment: Links to this post

Email ThisBlogThis!Share to TwitterShare to FacebookShare to Pinterest
Labels: toronto

Before driving back to TO last weekend, I decided to check out the progress on the ongoing demolition of White Woods Mall. Quite a bit had changed since Christmas... In the back, two new rows of retail are nearing completion. A couple of businesses, such as First Choice and Eye on Video, have already moved into the north set, even if their storefronts are incomplete. The white storefront on the right will be the new home of the Royal Bank. The northwest mall entrance still stands, though you can see there's little to its left, as the old movie theatre/bingo space has been cleared. On the right is the west row of new stores. My grandmother lived in the brown apartment building in the rear in the late 1980s - she was on the top floor, with a great view of town and Boblo Island. A sign of businesses still in the mall cleaning up. Over on the front side of the mall, a sign indicating that a few businesses are still operating.

Note the "Road Closed" sign. There is a good reason for this... The southeast side of the mall appears to be at the heart of the current demolition. The rubble and skeletal remains in these pictures were once the drugstore space and parts of The Met/SAAN. I'm not sure what the purple arch was for. Anyone? Are the boards and tarps included in the liquidation sale? Both shots from the north corridor, which I was surprised to see open. The west corridor is only other section that remains intact. A lonely tree next to SAAN, relocated to the other main "bargain retailer" spot in the mall (Big Top, Bargain Harold's. BiWay, etc). I doubt these GTA-sized craters in the parking lot will be fixed until the Bentonville Behemoth moves in. A trio of cranes slumber, awaiting the call to continue their mission to tear White Woods down.

Full set of pictures.
Scribbled at 11:58 PM No comments: Links to this post "Hmm, what do I want on my pizza...tomatoes, mushrooms, green peppers, anchovies and a fixed-rate mortgage."

This would be a fairly old bank building, as the Standard Bank of Canada was absorbed by the Canadian Bank of Commerce in 1928, one of the many bank mergers that led to today's CIBC. Ladies and gentlemen, we are proud to present to the public the exciting new fall 1948 Burns tinned meat fall lineup!

First the tender goodness of Burns Meat Balls, so special we have the can under wraps until we come up with a design that does these regal treats justice. Housewives note that Burns Meat Balls are the perfect accompaniment to those rice and pea rings pictured in every general purpose cookbook!

Second comes Burns Bologna, a space-age wonder that provides versatile convenience. Place it between your favourite bread and vegetables for an elegant sandwich. Cut into long round sticks for Baloney Dogs children will love. Serve with pickles as shown here to make you stand out as a sophisticated host at your next party. You'll need more than two cans - try Burns Bologna in triplicate!

Finally, you will be a smiling chef too when you open a can of Burns Pan Fried Hamburgers. It takes a monster pan to provide you with these economic edibles. Why risk food poisoning from poorly butchered fresh ground meat when Burns provides the 100% sanitary alternative? Did we mention it's economical?

Source: National Home Monthly, September 1948
Scribbled at 10:42 AM No comments: Links to this post

the return of spork and speef A salad plate consisting of chips, slaw (depending on what was in the dressing - surprised there's no bacon), mayo-topped aspic and Spork...not sure if this strikes the right nutritional note 60 years on.

We move on to a scrumptious plate of tinned sausage with "deep fat" mashed potato balls rolled in cornflakes. I guess the "Campfire" name makes sense, in that they wouldn't go rotten during a long sojourn in the wild.

Finally, Speef gets to strut its stuff after a fleeting appearance last week. Very odd presentation, like a low-end roast beef given the trimmings usually associated with baked ham (glazed and studded with cloves?). The Burns chef couldn't get pork off their mind. Anyone else think the "sweet potatoes" look like neon-dyed pear halves?

Source: National Home Monthly, May 1948
Scribbled at 3:55 PM No comments: Links to this post

one of the loneliest bus stops in ontario Photos taken between Lake Dalrymple and Sebright, March 11, 2007
Scribbled at 12:20 AM No comments: Links to this post 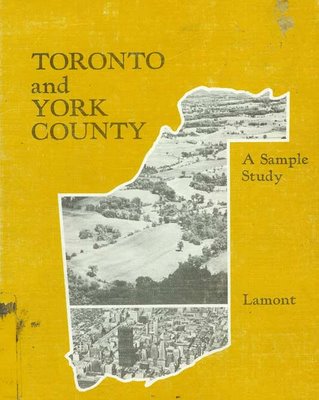 Yes, I could look for books in the catalogue, but there's something to be said for the thrill of the hunt, for hitting the stacks with a vague notion of what you're looking for and being amused or amazed by what you find in different branches.

Recently, I stumbled upon found a 1970 textbook about our region, Graham Lamont's Toronto and York County: A Sample Study. It appears to be a textbook aimed at upper elementary or high school students. It includes many period pictures of the city, including this one of Bloor east of Avenue, just as high-rise building was kicking in. Tell-tale sign this is a textbook? The margins are full of questions to ponder.
Several don't have answers any clearer than they were nearly 40 years ago(i.e., "what in your opinion is the best use for this waterfront land?").

Here are a dozen for you to answer. You choose whether to answer from a modern standpoint or with 1970 blinkers on. Spelling and grammar have not been edited.

1) Using a map of York County and Metropolitan Toronto, list as many place names as you can find containing the word Mill or Mills.

2) What is another name for a barrel maker? (yes, this is a vital question in the history of the settlement of Toronto!)

3) What in your opinion is the best part of the city for high-rise apartment blocks? Why?

4) Write a description of Metro as you imagine it will be in the year 2000.

6) What man-made features seem to have determined the limits of the Central Business District?

7) What would be the disadvantages of locating (a) a sporting goods store, (b) a book and gift store in a neighbourhood business street?

8) If both the Yorkdale Plaza (Mall) and the Central Business District were the same distance from your home, in which would you choose to do your Christmas shopping? Why?

9) The CBC in Toronto has a downtown location while the private TV station (Ed Note: this refers to CFTO, located at McCowan and 401) is on the edge of the city. Which do you think is the more advantageously situated? Why?

10) Do you think that the citizens of Toronto suffer from having too many governments? Give your reasons.

11) Would it better to have one single municipal government for Metro?

12) Why cannot the lakeshore in Scarborough be used for recreational purposes?
Scribbled at 11:37 PM No comments: Links to this post Ever since soldiers on the battlefield and rationers on the homefront were hooked on Spam during World War II, tinned processed meats have provided inspiration for advertising artists, cookbook editors and comedy writers. With their compact shape and long shelf life, Spam and its many imitators offered convenience for harried homes.

Trust me folks, this ad is only the tip of the tinned meat iceberg...

Links: A guide to Spam and its knockoffs. Also found a site with tons of info about Spam, even if it hasn't been updated since 1996.

Source: National Home Monthly, June 1947
Scribbled at 7:58 AM No comments: Links to this post