One of the oddest Easter images found kicking around the ol' Warehouse. If the egg was smaller, it would be tempting to label this post "Giant Mutant Baby Altered by Nuclear Test Attacks Innocent Easter Egg." As it is, it's as goofy as a shot in the same browning bound edition of the British tabloid featuring Orson Welles wolfing down a bowl of spaghetti. Perhaps the Mirror should have sponsored an eating contest between this chocolate-loving child and the movie auteur.

past pieces of toronto: the temple building

From November 2011 through July 2012 I wrote the "Past Pieces of Toronto" column for OpenFile, which explored elements of the city which no longer exist. The following was originally posted on March 11, 2012.

“Want to go see a monument destroyed?” the Globe and Mail asked readers in its July 6, 1970 editorial. “Go down to the corner of Bay and Richmond streets and watch them make gravel out of the Temple Building. It won’t go easily or prettily because it wasn’t built with destruction in mind. It was intended to last like the Pyramids, one of the wonders of a young country, a great stone tribute to an Iroquois who became supreme chief ranger of the Independent Order of Foresters (IOF) in 1881.”


Oronhyatekha liked whatever he was involved in to be the biggest and best in the field. Educated at Oxford thanks to an invitation from the Prince of Wales (later King Edward VII) during his 1860 Canadian visit, Oronhyatekha developed extraordinary networking skills to overcome the prejudices he faced as a Mohawk. As head of the IOF, which he had joined under a special dispensation (initially only Caucasians were granted membership), he built one of the largest insurers and fraternal organizations in North America. When the IOF required a new headquarters in the late 1890s, Oronhyatekha wanted the finest structure the organization could afford. His prestige was such that the Governor-General, the Earl of Aberdeen, laid the cornerstone in 1895.

The result was one of Toronto’s first true skyscrapers, the city’s tallest building for nearly a decade. Architect George Gouinlock designed the nine-storey (expanded to 10 in 1901) Temple Building with a cast iron frame protected by concrete and brick. Its Romanesque style matched structures rising nearby like Old City Hall and the Confederation Life Building. Durability was provided by four-feet-thick foundation walls that couldn’t be cracked by a sledgehammer. It was one of the first buildings in the city constructed with serious consideration for fire safety. As the Globe noted in 1896, “the whole building will be as thoroughly fireproof as modern science can make it, there being nothing to burn except the window frames and sashes.” When the building officially opened in August 1897, Oronhyatekha claimed that it was designed so that the IOF’s employees had “a place in which to work where every possible thing was done that could be done to contribute to their health and comfort while working for this great order.”

sound tracks: a sampling of detroit record stores, circa 1990 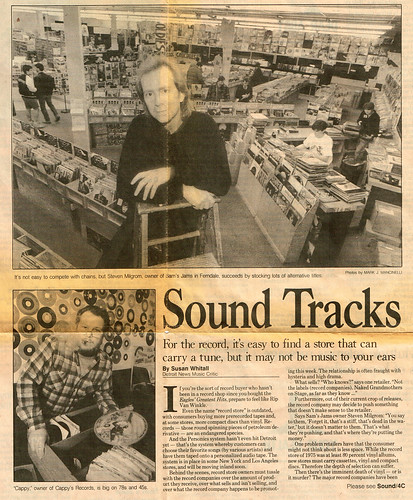 When I hit my teens, I started imitating my father’s interest in building a healthy music library. It started with an occasional cassette, then the gift of The Beatles 1962-1966 (aka “The Red Album”). During a stop at Sam the Record Man on a grade eight trip to Toronto—a stop I insisted the group I was with make, even if it cut into others’ precious time at Yonge Street head shops—I bought my first large haul of pre-recorded music, some of which is now laughable but was influenced by peers at the time—Poison’s Open Up and Say...Ahh! anyone?

In early 1990, my father clipped an article from the Detroit News listing record stores worth investigating on future cross-border trips. Both of us, along with my sister, would rapidly expand our collections thanks to at least two stores listed in the piece.

Twenty-three years on, most things associated with this article are gone. Nearly all the stores profiled. The massive tape collection I built up. My father. Yet, along with a bookshelf full of $1 used records and good memories, this browning piece of newsprint survives.
Read more »
Scribbled at 1:11 PM No comments:

past pieces of toronto: the four seasons motor hotel

From November 2011 through July 2012 I wrote the "Past Pieces of Toronto" column for OpenFile, which explored elements of the city which no longer exist. The following was originally posted on March 24, 2012, with some additions made on March 7, 2013. When Isadore “Issy” Sharp decided to build his first Four Seasons hotel at Jarvis and Carlton Streets, everyone thought he had lost his mind. Once a street lined with the homes of wealthy Torontonians, by the end of the 1950s it had a reputation as a hangout for derelicts, drug dealers and prostitutes. “How could you think of building a motel or hotel on Jarvis?” he was told. “People will think it’s a flophouse!”
Sharp ignored those comments. Once opened, nobody mistook the hotel at 415 Jarvis Street for a flophouse. As the Globe and Mail noted years later, the Four Seasons Motel Hotel was “an elegant, relaxed place for a drink or a night’s stay.”

Sharp, who worked at his father’s construction firm, had gathered an impressive group of backers, including clothier Edmund Creed and Shoppers Drug Mart founder Murray Koffler. He contracted architect Peter Dickinson, whose work included the Queen Elizabeth Building and the O’Keefe Centre, to design the inn. The result was a modernist hotel built around a central outdoor courtyard and swimming pool. Nearly all of the rooms faced into the courtyard and featured novel amenities such as remote-controlled televisions and free shampoo. After considering banners like “Thunderbird,” Creed mentioned his favourite hotel in Munich, whose name translated as “four seasons.” With a new breed of quality motels like Holiday Inn providing travellers with welcoming accommodations, Sharp settled on the Four Seasons Motor Hotel as the final name.

past pieces of toronto: subway interlining

From November 2011 through July 2012 I wrote the "Past Pieces of Toronto" column for OpenFile, which explored elements of the city which no longer exist. The following was originally posted on May 13, 2012.

When you mention lower Bay station, images conjured include an abandoned subway platform used for film shoots, a TTC test lab, a Nuit Blanche installation venue or an occasional construction detour. But when the Bloor-Danforth line opened in February 1966, lower Bay was part of an experiment to allow riders to reach any destination without transferring lines. The wye, a triangular-shaped rail intersection that allowed interlining, proved highly contentious among TTC officials during its six months of regular service use.


The wye was among subway designer Norman Wilson’s recommendations when the Bloor-Danforth subway line was proposed in 1958. “The importance of this [wye] connection between the Bloor and University lines cannot be overstressed,” Wilson wrote. “It provides the utmost in flexibility to satisfy both present and future traffic demands. While this connection is expensive, it is of minimum possible length and of maximum possible utility both to subway passengers and to the carrying on of subway operations.” The wye was approved, but the eastern half of the junction as temporarily dropped from the project following an April 1960 vote of commissioners. The vote was inspired by recommendations from TTC operations Manager J.C. Inglis to remove half the wye due to costs and the potential to create delays throughout the system. Wilson resigned from the project, while an angry Metro Toronto Chairman Frederick Gardiner called a special meeting to demand an explanation for the TTC’s about-face. Several reports later, Metro Council approved the wye by a 21-3 vote on June 28, 1960.