tales from the parking wars

The local media has gone gung-ho about tales of parking ticket quotas and increased driver rage against the parking cops. None of this surprises me, given several sketchy tickets I've received for parking on my street. A permit doesn't make you immune from zealous officials. I've learned not to park in certain spots, regardless of how they are marked.

Here's an entry on the ticket from my journal - I used to number each installment, giving up after one volume disappeared along with the backpack it was in.

I was starting on my way to work when I noticed a piece of yellow paper sticking out of the top end of the hood of my car. Couldn't figure out why I received a parking ticket - I'd parked in the space in front of the house many times and never seen anyone ticketed. I'd assumed that the "no standing" sign referred to the space just beyond the driveway.

Upon closer inspection, there was something fishy about the ticket. The location given was "nr 153 Manor Rd", when I was parked directly in front of 145 Manor Rd. The ticket stated I had no valid permit (I later found out this meant the ability to park in a no-standing zone). Then came the kicker - it was dated May 26th.

May 26th is tomorrow.

When I got to work, I called Dad for advice. He confirmed what I'd already thought about doing, which was calling up parking and fight the ticket. After a short hold period, I reached a parking rep who sounded completely out of it. They must have been sick, cranky, in caffeine-withdrawl or some combination of the three. They weren't helpful, other than suggesting I should go downtown and get somebody to look at the car.

The subway crawled its way downtown, a ride reminiscent of the Northern Line in London. The wait between Union and St. Andrew was like the usual delay between Camden Town and Euston. The longer I sat in the subway, the more my stomach twisted, attempting to control my rage.

Luckily things went smoothly at Metro Hall. The wrong date was my salvation, as a friendly clerk cancelled the ticket. My body breathed a sign of relief, though I still feel drained from the experience.

Questions still run through my head. Why had I never been ticketed there before? Was a rookie responsible? A drunk cop? A prankster? A jerk?

Since that time, I have always parked behind the pole. This hasn't pleased other drivers—someone once left a condescending note on my windshield that a third car could have fit in the space, another time an SUV driver yelled at me as I was getting out of the car for not leaving enough room for him. When I explained what had happened, he launched into a stream of obscenities that I quietly walked away from. - JB
Scribbled at 10:39 PM No comments: Links to this post

today on the sunday constitutional... 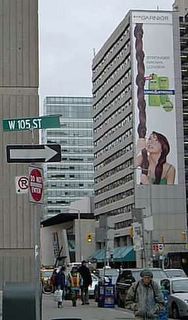 What's wrong with this picture, shot on a mid-walk trip to Manhattan? Note that famous NYC attraction, the Bata Shoe Museum. 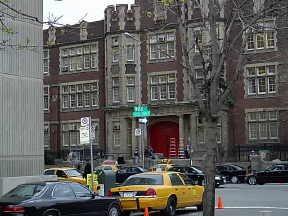 Yes, Bloor and Madison has suddenly slipped into a parallel dimension where it is now located south of Columbia University. Question: will this really fool anyone into believing it's the Big Apple?

(Or maybe I've got a time machine kicking around...) 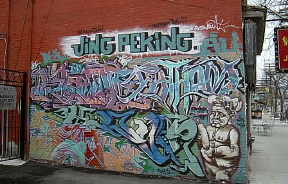 You may have read in the Globe this weekend about city plans for handling graffiti. Here's a highly visibile example on College near Croft - note the message to our departed police chief. 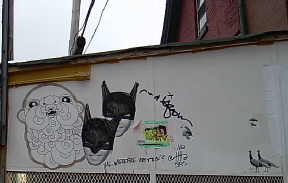 Creative interpretation of the Val Kilmer faces slowly fading from buildings around the core. This one mourns his career while paying tribute to one of his roles. At least it ain't The Island of Dr. Moreau they're saluting... (Augusta and Nassau, Kensington Market) 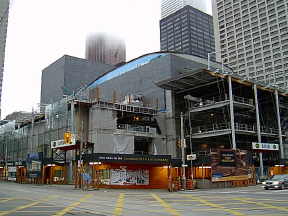 The Four Seasons Centre (aka the new opera house) is well on its way at Queen and University. Note the mist around the tops of the skyscrapers in the back. At least we weren't hammered with snow like my family back in A'burg.

Let's zoom in on the mist around Scotiabank - anybody want to submit a good thriller plot based around this pic? - JB
Scribbled at 12:48 AM No comments: Links to this post

We continue with the third of six vintage Gulf ads discovered in the Warehouse. Commentary by J. Percival Wexford-Snoopington, Ph. D. 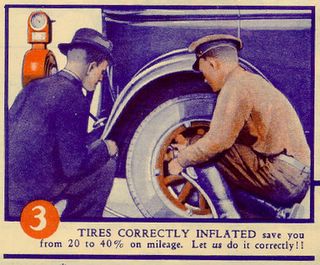 Tire inflation was an important part of the service attendant's daily itinerary. No more allowing customers who no prior knowledge of operating an air pump to handle these delicate pieces of machinery. Service attendant fatalities from standing too close to customers who overinflated their tires which promptly exploded declined by 57% after new procedures were introduced in 1927.

However, some station owners came up with their own interpretation of "save you from 20 to 40% on mileage". Long before 70s television journalists uncovered rotten service station practises in Georgia, some operators instructed their pump jockey to overinflate customers' tires just enough so that they'd have a blowout a mile or two down the road, then be forced to return to the station for "repairs", driving up a station's profits by an average of 20-40%. - JB
Scribbled at 12:25 AM No comments: Links to this post

three seasons in an evening 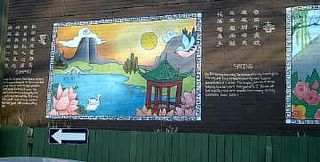 This is part of a mural in the parking lot on Gerrard just west of Broadview, featuring interpretations of the seasons. 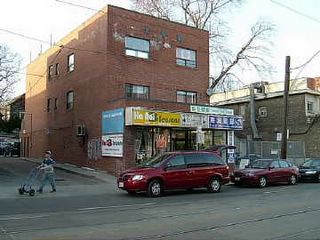 Here's the outside of the restaurant, located steps east of Broadview on the north side of Gerrard. It's a cozy place, which filled quickly after our arrival. Probably a good thing we were a smaller group than usual (only four were able to make it). 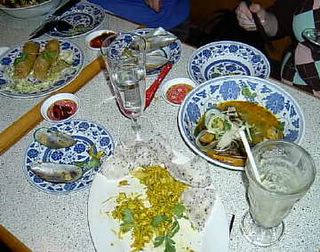 Note the empty glass on the right, a quickly-downed jackfruit shake. Two of us were going to go for soursop, but that was the only fruit out of the half-dozen specialty shakes on the menu that they were out of. Reminded me of the shakes at The Mini in Windsor (yes sis, one of these days we will go there again!). One person tried a durian shake, which they thought had a slight hint of dirty socks. 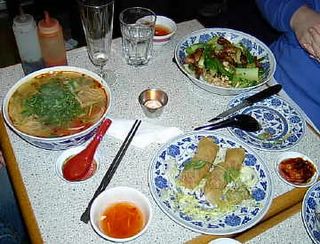 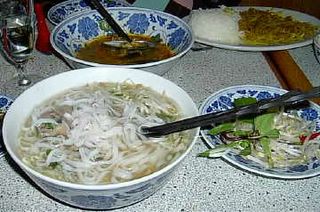 In front, my main, the #18 Pho Tai Nam (rare beef with well done brisket), large size. To the right in the back, the #25 Bo Xao Sate (spicy beef sate with basil and mint).

To top it all off, it was the restaurant's first-year anniversary. Cue free champagne and black forest cake.

Service was excellent - our server showed us jackfruit in its natural form, since most of us had never seen one before, then later showed us the house specialty fish dish that was his dinner. - JB
Scribbled at 11:58 PM No comments: Links to this post 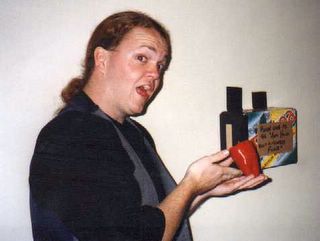 Looking for fun old photos to throw on the site, I dug back in the archive to my university daze. The wayback machine has been set to the fall of '95, with Mr. Buchanan (our dancing king from a few months back) proudly displaying two items. The red pepper came from a clown show we went to at either Tarragon or Passe Muraille as part of a script analysis class.

The box in background still pops up in discussion among the gang - if you ever hear any ex-Arts Hausians refer to the Rent-a-Monkey Fund, this was the collection box. JD and Brad had the brilliant idea that if they could collect enough money, we could rent a monkey for a day. Who doesn't like monkeys? They pitched the fund at several house meetings, but alas, the fund never made much headway. It was a terrific idea, but its time hadn't arrived.

Hmm, maybe I should start the 10th anniversary monkey fund... - JB
Scribbled at 7:58 PM No comments: Links to this post

Another month, another freebie newspaper. Today's entry into the newsbox sweepstakes is Dose, CanWest Global's attempt to hook twentysomethings.

I fell out of my chair looking at the paper's "About Us" page, which neatly sums up everything wrong with it. Tell me this doesn't sound like a cry against the man written by somebody funded by him:

There is a lot of crap out there and we realiuzed there was nothing that was relevant so we said screw it, we are going to create a new source of information for our peers.

Or at least severely dumbed-down information for their peers. Forced hipness is a rare beast to pull off well - we'll see if CanWest can do it.

(I should fess up that I've spent most of the weekend listening to the CD version of Al Franken's Lies and the Lying Liars Who Tell Them, so my media crap-detector is running higher than usual).

Design-wise, it resembles a messy headline-news channel, down to the "ticker" (in today's issue, a stream of quotes from the deceased pontiff runs atop each page). Little boxes everywhere, most short stubs of stories that direct you to the Dose website, which I suspect the publishers hope you check once you reach the office. I decided to check one of the "Home" page links, a teaser about Robert Mugabe. It led to a Reuters story, with all proper names in bold caps. It might work if the names were web links, but they aren't, so it looks like a primer teaching children to read. Guess that's the audience they expect.

The paper promises to bring you "everything that matters". Only the coverage of the death of the Pope fits this criteria, unless oral sex for grade 9s or a page on potential dates for Prince William are big events in your life. Most of the sports page is filled with a chart treating snack foods like teams in the NCAA tourney. Kind of cute, but not that funny. Outside of the Pope and a centrespread asking 150 people what their ambition was, the largest-size story is a photograph of spring shoes that could be mistaken for a shoe store ad.

Guess I'm either a young grump or I'm starting to fall outside the target demo advertisers want to go after. They say the target audience is 18-34, but I'd replace the 3 with a 2.

Here's an interesting take on the whole free tabloid phenomenon from The Tyee. - JB
Scribbled at 8:20 PM No comments: Links to this post