This post provides supplementary material for a Torontoist article about the evolution of Toronto's pinball machine regulations, which you should read before diving into the following text.

I began my research for the article by going back to the 1930s, when guardians of morality began pressing to curb or eliminate pinball machines. On my first run through the Star archives, one of the earliest references to pinball I found was on the kids page of the May 5, 1934 edition. Problem: it wasn’t the pinball I was looking for:


Sometimes other illicit items were found by police on the prowl for pinball machines. The Star reported in its January 4, 1940 edition that while a machine reputed to be in a College Street soda fountain had “mysteriously disappeared,” six bottles of gin and a carton of beer were found in a hiding spot. Instead of being charged with keeping a common gaming house, clerk Victor Shuleck was charged with “having liquor illegally.” 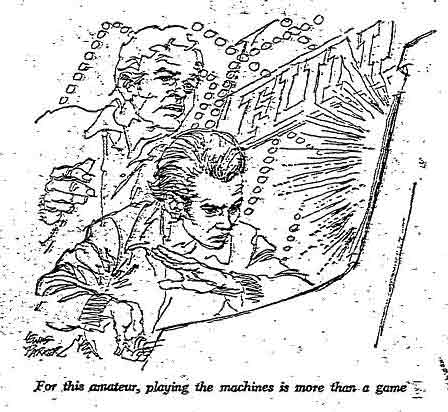 Nearly 30 years later, Bill Cameron profiled Kenny, a 17-year old “pinball artist” who hung out at Funland, for the Star. When the piece appeared on June 10, 1969, Kenny had shifted his pinball allegiance to the Yonge Street landmark from an arcade on Dundas Street “because he had figured out all the wrinkles on the Dundas Street machines and could put a dime in any one of them and run it up to 20 free games and play all night.” Management at that arcade suggested it was best for Kenny to move on.

Cameron described Kenny as “a gentleman amateur” more interested in mastering the game than hustling other players. According to Kenny, “You have a very poor class of people at the machines. They bang around and they don’t pay attention and they tilt. You have to be very gentle with these things. It is all in the timing. He was also a poster child for some of the fears educators had about pinball: he started skipping classed to play pinball at 12 and eventually dropped out. After his father kicked him out, Kenny rented a room, worked odd jobs, lived off hamburgers, and played more pinball.

“You are not supposed to approve of any of this,” Cameron wrote. “The life of a pinball artist is not an easy one, and the lives of most men with an eight-grade education are not happy, not in the end. But when you watch Kenny at the machines, you find it very difficult to tell him that he must give it up and improve himself.”