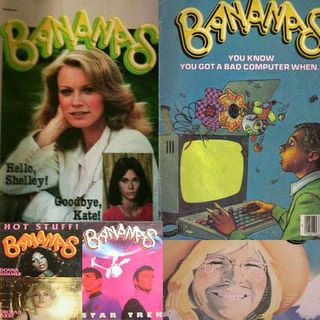 A post sometime back about my memories of Woolco also spurred memories of Bananas magazine. Little information about Bananas online, other than its editor was Jovial Bob Stine, who later cashed in for Scholastic as R.L. Stine, writer of the Goosebumps line of pre-teen books.

Bananas mixed entertainment features, music reviews and MAD-style humour. A strong KISS fixation runs through the late 70s issues. The magazine ran out of steam in the early 80s, after it switched its focus to video game articles and humour - judging from the later issues we had and those for sale on eBay, Bananas peeled its last in '84.

Amy and I found most of our issues at Woolworth's - earlier ones (including the very first issue, c. 1976, with features on Chico & The Man and Mad cartoonist Don Martin) at Southland Centre in suburban Detroit, late 70s/early 80s in Leamington. I'm guessing the chain had a remainder deal with Scholastic, as back issues of Dynamite! and related mags were usually available in the toy section.

Aside about the Leamington Woolworth's: located downtown at Talbot and Queens, it was one of those weird large locations that was a Woolco in all but name, though it finally switched nameplates during the last few years of its life. Next door on Queens was the only Loblaws I recall in Essex County (their banner across the rest of the county was Gordon's, later converted to Zehrs), which became the first No Frills in the area. Across the street on Queens was a used book store where I stocked up on cheap comic books and 1976 baseball cards.

Articles that stand out: