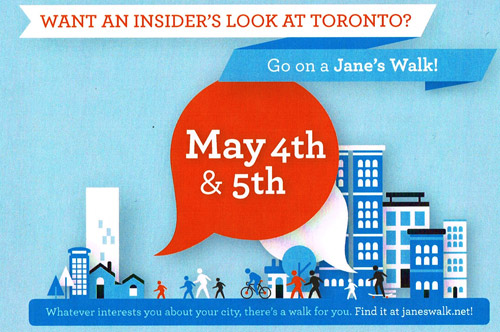 ITEM! If it's the first weekend in May, it's time for Jane's Walk. In just six years the annual event has grown from a handful of strolls around Toronto to walks in 25 countries. I've enjoyed the walks I've joined, and decided this year to lead one.

Toronto has long enjoyed one of the most competitive newspaper markets in North America. With no fewer than three major competing dailies at any time since the 1870s, Toronto readers are accustomed to a broad range of editorial viewpoints. Our papers have been run by a cast of characters including philanthropists, labour and social activists, political parties, comic strip enthusiasts, lousy businessmen, and Fathers of Confederation. The behind-the-scenes stories were often as dramatic as those that were printed in the pages of publications bearing banners like Empire, Globe, Mail, News, Star, Sun, Telegram, and World.

This walk will look at the sites where the news was produced, and how those sites were used as public gathering places, especially during election campaigns. We’ll reflect on the architecture lost when the cluster of newspaper offices around King and Bay gave way to financial towers. We’ll explore the circumstances under which some of today’s major dailies were born, and how nearly-forgotten papers died.


Where: Starting at the southeast corner of King Street East and Leader Lane (across the street from the King Edward Hotel).

ITEM! Woke up to great news yesterday morning -- Kevin Plummer and I were nominated for a National Magazine Award in the "Blogs" category for our work on Torontoist's "Historicist" column. We've got pretty good company in our category [PDF of all nominees]. Coming on the heels of the column's fifth anniversary, this is a great honour. The winners will be announced on June 7.
Scribbled at 2:55 PM