Even though my body and canned soup generally have issues with each other these days, I don't mind the occasional can of an oddball flavour.

Not sure what to expect at security, I decided to only bring back one can of any of the soups tempting me from the shelf at the Camden Town Sainsbury's. Trying to remember flavours I liked that are not/rarely available hear, I settled on dependable old Baxter's. One coin flip later, a can of Royal Game found its way into my cart.

As usual, my worries didn't come to pass. Heathrow security had no problem with the soup, chuckling that I could leave it in my backpack. 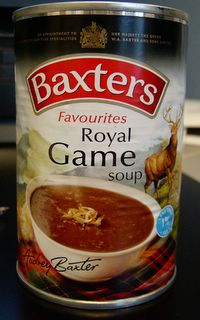 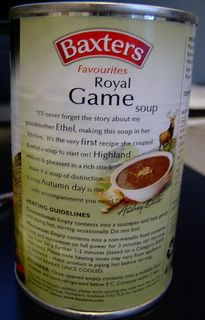 The back has a miniature of the front, plus a backstory for the contents inside.


I'll never forget the story about my grandmother Ethel, making this soup in her kitchen. It's the very first recipe she created & what a soup to start on! Highland venison & pheasant in a rich stock make it a soup of distinction. A crisp Autumn day is the only accompaniment you need. - Audrey Baxter 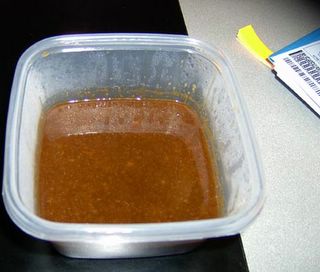 As for the soup itself, it looks like mock turtle or beef without any extras.

How Does It Taste: Meaty. There's definitely game in there, though the flavour is not super-gamey. Shreds of potato and carrot boost the texture.