john the hugger and other scenes from toronto police court, 1909 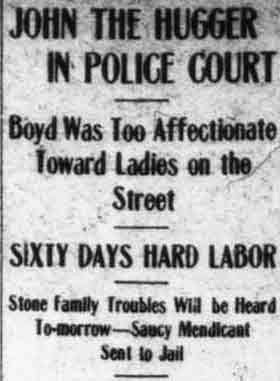 As Toronto's police magistrate between 1877 and 1921, George Taylor Denison III passed judgement on thousands of people in his court. The press dutifully covered the proceedings daily, leaving historians with a record alternatively amusing, enraging, and heartbreaking.

Over the years, I've saved several police court reports, usually topped with a catchy headline like this one. Who doesn't want to know the sordid details surrounding "John the Hugger" that caused him to be hauled in front of Denison?

Let's dive into the details of John, the Stone family, the "saucy mendicant,"  and the other cases included in the News's court roundup on November 22, 1909... 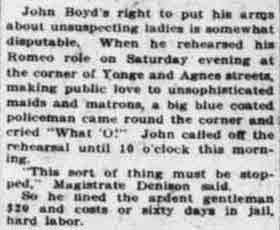 Court reporters loved poking fun at those hauled in front of Denison, and at their victims in certain cases ("unsophisticated maids and matrons" would not fly now). Perhaps Mr. Boyd resumed his rehearsals at another corner after his release.

As for where "John the Hugger" attempted to play Romeo, today he would be serenaded by religious zealots: running west from Yonge, Agnes Street was one of the roads stitched together to form present-day Dundas Street. 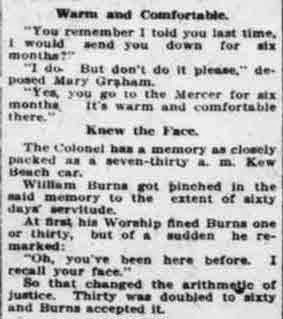 Would we now say that "The Colonel" (a nickname for Denison) "has a memory as closely packed as the Dufferin bus" or "the Queen car"?

As for where Mary Graham was sent for unspecified reasons, the Andrew Mercer Reformatory for Women was the first prison built specifically for women in Canada. It operated between 1872 and 1969. Its Liberty Village site is currently occupied by Lamport Stadium. 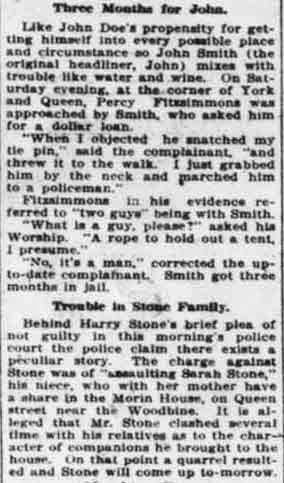 
A swift thinker, a keen student of human nature, the possessor of an incisive tongue, he extinguishes academic lawyers, parries thrusts with the skill of a practiced swordsman, confounds the deadly-in-earnest barrister with a witticism, scatters legal intricacies to the winds, will not tolerate the brow-beating of witnesses, cleans off the ‘slate’ before the bewildered stranger has finished gaping, shuts the book with a bang, orders adjournment of the court, then, stick in hand, strolls off to lunch at the National Club. During the morning he may have committed a burglar to the penitentiary for five years, told witnesses that he couldn’t believe a word of their testimony, informed a troublesome lawyer that he was wasting time over technicalities, made peace between husband and wife, exchanged pleasantries with an old-timer, ordered a wife-beater to be lashed, and disposed of a hundred other cases. 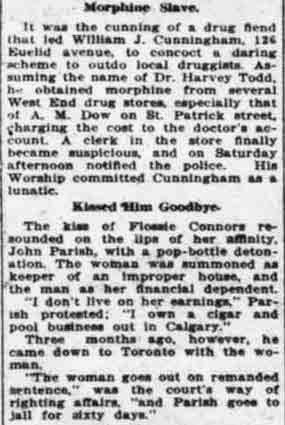 Morphine slaves and drug fiends are not uncommon characters in the police court blotters of this era. 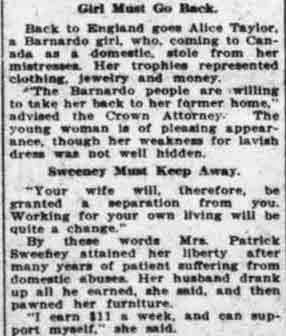 For more on the "Barnardo people," check out David Wencer's Historicist column on their attempts to move destitute youth from England to Canada. 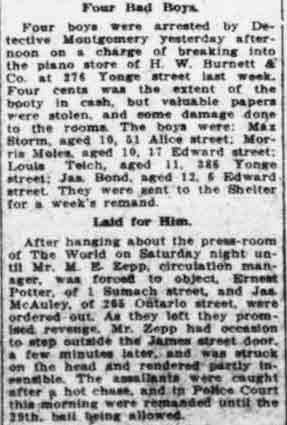 In terms of where to find the most colourful Toronto police court coverage of the era, I recommend scrolling through the News, Star, and Telegram.
george taylor denison III history john the hugger police court toronto