bonus features: next on tvontario, doctor who

- November 28, 2013
This post offers supplementary material for a Torontoist post I recently wrote, which you should dive into before reading any further.

As much as I hate the new archives databases the Toronto Public Library uses for the Globe and Mail and the Toronto Star (a grocery list of reasons that would fill several posts), there are some bright spots. One is the inclusion of Star Week, which will be handy for researching television- and food-related articles. For this particular story, Star Week helped nail down Doctor Who's initial airdates on TVO. It also offered an interesting glimpse into Saturday night television at the dawn of the 1976-77 season.

None of the shows spotlighted on Star Week's cover had staying power. Clockwise from top left:

Tony Randall - The Tony Randall Show. Sitcom about a widowed judge. Only show featured on this cover to last more than one season, surviving until March 1978.

John Schuck and Richard B. Shull - Holmes and Yoyo. Sitcom about a cop and his robot partner. Cancelled December 1976. 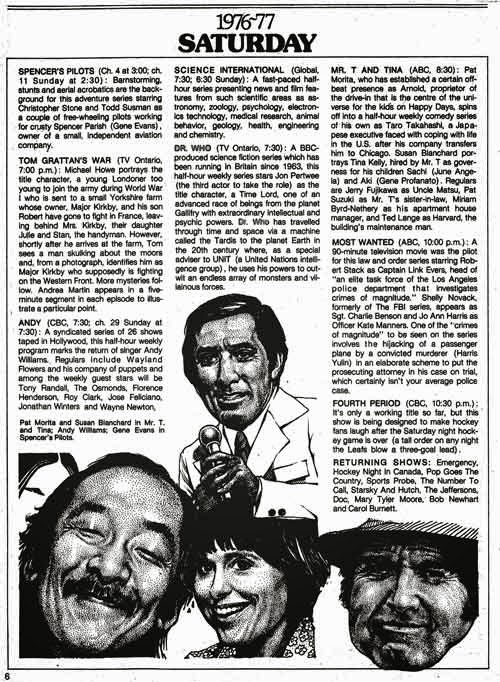 Doctor Who wasn't the only British import TVO added discussion points to. As shown here, the 1968-70 ITV drama Tom Grattan's War was supplemented with bonus material featuring Andrea Martin, then appearing on another show which debuted in September 1976: SCTV. I'd love to see how Martin illustrated particular points about a young Londoner's adventures set against the backdrop of the First World War. I'm guessing Edith Prickley didn't make an appearance.


After the post ran, I received an email from a reader who passed on the story to Dr. Jim Dator, who clarified his association with TVO and Doctor Who. Dator was on a two-year absence from the University of Hawaii, and worked with the Ontario Educational Communications Authority (OECA, as TVO was originally known) on their contribution to Science Council of Canada's Canada as a Conserver Society project [PDF]. Upon returning to Hawaii, he shot one year of extros there before Judith Merril took over.

While I did co-teach a course at New College, and was given a visiting professor title in UT Department of Industrial Engineering (of all departments) thanks to Arthur Porter, and was also affiliated with the Department of Adult Education of OISE, thanks to Roby Kidd,  it was OECA who paid my salary. The Dr. Who stint was the final TV production I did for OECA, and the clip you sent of my swan song was actually filmed in Honolulu.

Besides the Torontoist TVO piece, I also wrote a post for The Canadian Encyclopedia's blog about Sydney Newman, who spearheaded the show's creation. If you're interested in more about Newman, check out Adam Bunch's Toronto Dreams Project post. For more TVO-era clips, check out Retrontario's survey for BlogTO.
1976-77 television season boogie doctor who history star week television toronto tvontario