This post offers supplementary material for a Torontoist post I recently wrote, which you should dive into before reading any further. 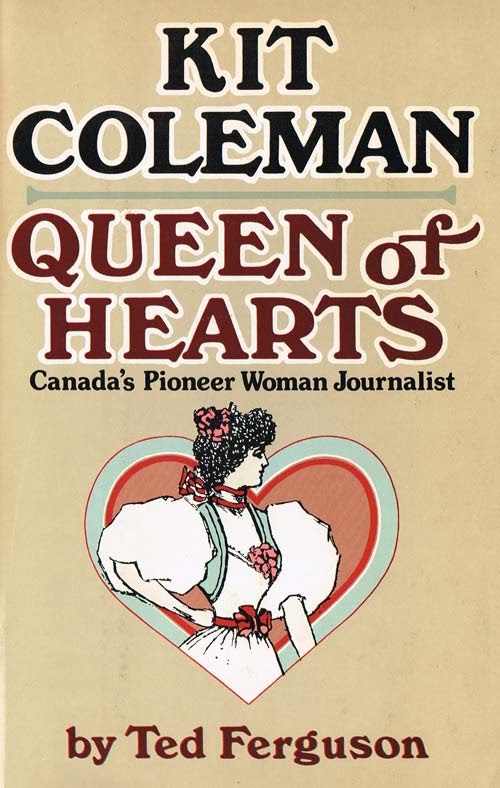 If you're interested in sampling Kit Coleman's writing, the best compilation is Ted Ferguson's Kit Coleman: Queen of Hearts, published in 1978. Ferguson organizes excerpts from Kit's columns by theme, generally choosing her funniest bits. One major drawback of this book: no footnotes indicating which editions of the Mail or Mail and Empire the pieces were drawn from.

The last chapter offers a series of "words of wisdom" from Kit. Some of her advice seems quaint, some reveals her distrust of others, some only require slight tweaking to remain relevant:


The arrogance of youth would be unbearable if it were not so amusing.

Candor is a virtue for which women pay most dearly.

It is no use attempting to converse with cranks. As soon as you discover their crankism, fly.

Was there ever a friendship between two women that did not mean a plot against a third?

There is no more charming girl in all the world than she who is attentive to old ladies.

On the dunghills of life, we sometimes find the sweetest flowers growing.

Friendship is far more tragic than love. It lasts longer.


For a biography of Coleman, check out Barbara M. Freeman's Kit's Kingdom: The Journalism of Kathleen Blake Coleman, published in 1989. Freeman makes a valiant effort to sort out Kit's background, provides contexts for her contradictions, and includes footnotes.

If you want to experience Kit's writing in its original context, there are several options. Most editions of the Mail and Mail and Empire published during Kit's first decade of "Woman's Kingdom" were uploaded to Google News Archive before it (sadly) ceased its old newspaper program. Look for Saturday papers, starting with October 26, 1889. For editions not on Google, microfilm is available at the Toronto Reference Library - ask the staff at the newspaper collection desk to unlock the cabinet for you.

One thing you'll notice while flipping through years worth of "Woman's Kingdom" is the ever-changing column header. Some weeks it was simple, some ornate. Never did it depict anyone who resembled Coleman, which I imagine suited her sense of privacy.

More words of wisdom from Kit:

One reason why men are so ready to deny a woman a sense of humour is because the object of our humour is pretty apt to be a man.

One yearns for the toy called fame, and cries at intervals for it all his life long. If he gets it, he finds a bladder that shrivels with the first pin-prick.

Ideals, hope, ambitions tumble into ruins before the necessity of gaining daily bread.

Revolutions are created not by the strength of an idea but the intensity of an emotion.

There is little use in loud-voiced condemnation of things we do not understand. The bray of the ass drowns all other sounds but that of his own voice.

You needn't be proud of yourself because Nature makes you love somebody. Nature, after all, does the same service for monkeys.

The Mail and Empire's premature front page announcement that Kit was on her way to Cuba, via Tampa, to cover the Spanish-American War. She enjoyed a longer stay in Florida than she anticipated, encountering endless roadblocks before she found a freighter willing to take her over.

Ask yourself and your neighbour why anyone need tramp through any other city and revile and deefame it while things are so bad at home. It has always been the world's way to go abroad to seek for vice, to go abroad to "convert" so-called "heathen" men, followers of Mahomet and Buddha, men who really endeavour to live up to their old, old-faught creeds far more earnestly than we Christians do. It is to laugh when one reads about religious crusades among ancient peoples while such rottenness obtains at home. The fact is we are over-burdened not with religion so much as with vanity - the intense vanity which overrides the black and tan and yellow men of other races, of other creeds. I always smile when I read or hear of a Gentile trying to "convert" a child of Israel - of God's chosen people. No one admires that great, intellectual race more than I do - persecuted, humbled, driven hither and thither - a mighty race, genius gifted in music, literature, art and finance.