While searching though back issues of the Toronto News for holiday-related material for an upcoming Historicist column, I stumbled upon a cartoon that seemed to fall into the genre of strips/one-offs whose plot was built around getting one of the characters to say the title in the final panel. You be the judge as to whether this style of humour still cuts the mustard a century on. 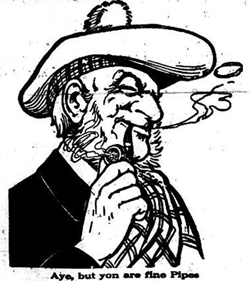 The same page of the News found the gruff old Scot on the left passing judgement on the quality of pipes found at Toronto branches of United Cigar Stores. This stereotypical depiction appeared in the retailer's advertising of the period, with different captions under his satisifed visage to suit the ad copy.

News stories on the same page: