Before reading this post, check out the related articles over on Torontoist. 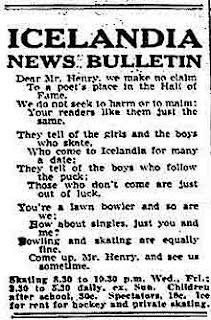 Icelandia ran short "Ice News Bulletins" in Toronto newspapers that usually pitched the latest events or offered lousy verse about enjoyed its facilities. This one, which appeared in the Globe and Mail on January 18, 1947, tries to attract a lawn bowler (or is "Henry" a reference to another poet or an enemy of the rink?). The poet is dishonest, as headlines that week indicated some of those who tried to visit were "out of luck." Ask the girl denied entry because of her faith if she wasn't harmed or maimed. 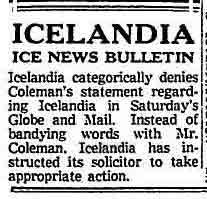 The tone was quite different in the ad it placed in the Globe on February 3, 1947, two days after sports columnist Jim Coleman related the latest incident of discrimination against potential customers (in this case, a Greek skater who Coleman was happy to note punched out a rink employee). I was unable to determine how far Icelandia went in taking action against Coleman. The paper continued to run Icelandia ads despite the lambasting the rink received from the editorial staff.

The city considered buying Icelandia in 1950 but found the asking price of $115,000 too high, especially for a building that required an addition to the building to bring the ice up to standard. With no fanfare, it appears the rink closed its doors the following year.

Another person affected by the unwelcoming atmosphere created for those patrons Icelandia management preferred not to cater to was actor Al Waxman. In his autobiography That's What I Am, Waxman described a youthful incident where his hockey teammates unanimously elected him captain. The coach quickly vetoed the team's decision, as Waxman was the only Jew.

I waited until everyone left, then, sitting alone in that locker room at Icelandia, where Jews were not welcome, I cried. I had been hit by flying pucks, slapped in the face by swinging sticks, smothered in scrambles around the net, but had never cried before. 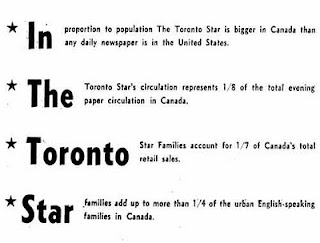 While the Toronto Star used ill-considered stereotypes to tout its circulation in other publications in late 1947, within the paper itself a more modest ad, like this one from the September 27 edition, made a similar pitch. The same page featured a story on the annual convention of the Trades and Labor Congress in Hamilton, where delegates unanimously passed a resolution condemning Canadian hospitals for discrimination in the hiring of nurses after a black woman was denied a placement in Owen Sound because of her skin colour (the woman was eventually hired by St. Joseph's Hospital in Guelph, an achievement the Star celebrated in an editorial two weeks later).