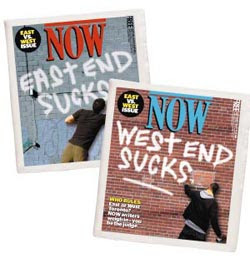 The gimmick in this week's issue of Now is a cover story pitting Toronto's east end versus its west side in a battle of which sucks the least. Of the defences provided, I found Joshua Errett's weigh-in about the west's superiority was obnoxious in its dismissal of a section of the city he finds akin to either a retirement community or "Maoist China," where dullards have lives nowhere near as exciting as his.

So the east doesn't have the cultural landmarks that stand west of Yonge, and it's inevitable some people who reside beyond the Don are boring. Bleh. I suspect Errett was going for a tongue-in-cheek treatment that came off as annoying instead of funny. Part of my annoyance may stem from not being a fan of his mean-spirited-to-look-cool-and-or-contrarian writing persona. Case in point: I felt he dropped the ball when he claimed the east "lacks that ability to reinvent itself. It is staid, which ultimately spells boring." Funny—I'm fascinated by the gradual gentrification of eastern neighbourhoods and the commercial strips along Danforth and Queen, the ethnic diversity of Scarborough's plazas, and so on. Maybe he was burned by a bad meal along the touristy stretch of Danforth or suffered a traumatic encounter with a stroller in Leslieville.

Comments published so far on the paper's website take issue with the exact definitions of "east" and "west" in the city, pointing out that the core—roughly Bathurst to Jarvis—is neither...which cued the trolls to say how pointless the entire exercise is. If nothing else, the feature provokes thoughts about what each side of the city has to offer in terms of attractions, liveability and slap-your-forehead stereotypes.

Let the battle rage away, since secretly everyone knows that soon north of Bloor will be where the arbitors of hip and happening will reign supreme!

OK, maybe I jest...but eye might be thinking along a similar wavelength. A browse through Twitter reveals another great suggestion for parodying the feature.
Scribbled at 3:03 PM