Before reading this post, check out the latest installment of Historicist. 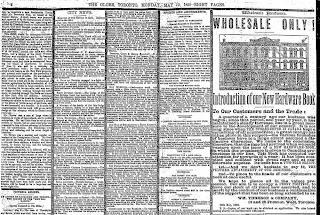 This is a portion of a page from the May 10, 1880 edition of The Globe, the day after George Brown succumbed to complications from the wound he suffered in an assassination attempt several weeks earlier. Note the thick lines around each column—they appeared throughout the entire edition that day, the first time I have ever seen mourning treated in this manner by a newspaper (if anyone can think of other examples where it occurs on every page, leave a comment).

Descriptions of Brown's assassin George Bennett played up his half-white, half-black background in terms that wouldn't pass muster these days. The March 26, 1880 edition of The Globe noted that "his appearance would not betray the mixture of his blood, for although darker than the majority of Anglo-Saxon blood, he does not possess the Negro cast of countenance. His features are, in fact, suggestive of Spanish rather than of Ethiopian extraction."

The March 27, 1880 edition of The Evening Telegram provided this sketch:


In appearance, Bennett is very short, standing about five foot two inches; he is as dark as an octoroon, has a heavy black mustache and imperial, prominent nose and large mouth. In character he is vicious in the extreme, and is said to be as cowardly as he is treacherous. It has been commonly remarked that he would seldom look anyone in the face. Even when he was swaggering his eyes would search the ground. While searching for Brown's grave in the Necropolis, I ironically stopped first by the tombstone of one of his conservative-leaning newspaper rivals, John Ross Robertson of The Evening Telegram. Robertson wrote the following words in a May 10, 1880 editorial after Brown's passing:


We cannot help but feeling with his afflicted family that the manner of his departure was heart-rending, but, as public journalists, we have more to do with his life than his death. He stood forward as a strong conservative representative of social and moral values. Even his warmest friends and admirers would admit that he had, for one who had so large a share in moulding and sustaining the institutions of the country, some defects, but they are ever ready to palliate them on reasonable grounds. Many of his old followers recall with enthusiasm, even though they themselves may have suffered by them, his warm, impulsive temperament, his unbridled energy, his impetuosity, his prompt decision, perhaps necessarily arising from the variety of his engagements, his unfailing trust in the future—ever hopeful, ever pressing upwards and onwards, trying to alter and better at every step—his unbounded reliance on the industry and integrity of the people and the unfailing resources of the country. They do not deny that such a character, if pitted against cool, calculating craft, would be likely to make mistakes, but they assert boldly that whatever failings he may have had, leaned to the side of virtue. In the course of human affairs there is no room for many such conspicuous figures, and it is fortunate that his career will bear closer inspection, and that his example may be passed profitably down to posterity.