the tip of ted's life

"But Jim, I cause a lot of accidents. Will Universal help potential employers overlook that?"

"Ted, your experience and in-depth knowledge of what happens in an accident should land you a job in no time. As I said, the field is booming!"

Marvel Super-Heroes was one of the backbones of Marvel's reprint lineup in the 1970s. Carrying on the numbering of Fantasy Masterpieces when its first issue (#12) appeared in 1967, the title began as a double-sized comic consisting of new tryout stories a la DC's Showcase backed with Golden Age superhero reprints. Both elements vanished by issue 21, to be replaced by various reprints until the series settled down to a normal-sized republishing of 1960s Hulk and Sub-Mariner tales.

The Hulk Must Die! (story: Stan Lee, art Bill Everett over Jack Kirby layouts) originally appeared in Tales to Astonish #78, April 1966. This tale marked a couple of turning points for Ol' Greenskin. For nearly a year, the series was a testing ground for Stan Lee to try out new artists and see if they could adapt to Jack Kirby's action-packed style. Some were DC vets hiding their identities (Mike Esposito as "Mickey Demeo", Gil Kane as "Scott Edward"), others admitted who they were (Bob Powell, John Romita). With this issue, Bill Everett settled in for a half-year stay, his cartoony style well-suited for the Hulk's brutishness and the movie serial pacing of the series. I love the following panel, where it's clear the Hulk suffers from a king-size case of ADD.

Take a gander at those choppers. One session with the Hulk would provide a lifetime's income for any dentist who survived the encounter.

Ever since the Hulk's debut in 1962, Lee had difficulties in establishing a permanent persona for the character. The Hulk's brain capacity varied wildly, from intelligent to barely functional (which later writers chalked up to multiple-personality disorder). After eight months of gradually diminishing brain power, the Hulk's trip back from the future at the start of this issue marks the point where the character settled into the "Hulk Smash!" mode most people are familiar with (he was thick as a brick for most of the previous issue, but managed to make a reasonably intelligent observation before being sucked back into the present). 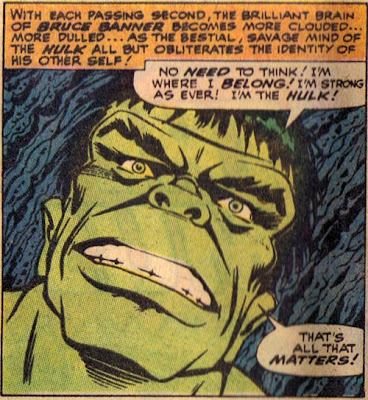 The story deals with the army capturing ol' Jadejaws and leaving him in the care of Dr. Konrad Zaxon, whose name screams "EVIL!!!" Something about mastery of organic energy and a shiny suit of armor allowing him to conquer the world. The tale ends with Zaxon pointing an "organic energy attractor" (translation: big blue gun) at a pissed-off Hulk...TO BE HULKINUED!
Scribbled at 1:14 PM