This installment of my "Ghost City" column for The Grid was originally published on April 16, 2013. 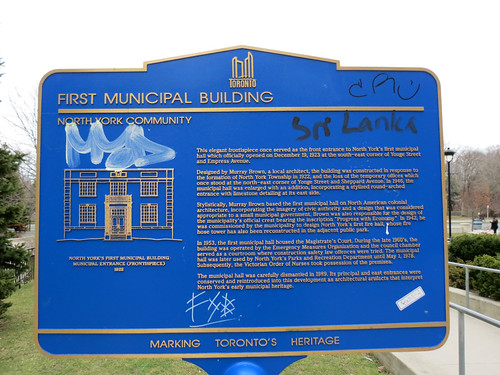 When North York split off from York Township in 1922, space was required to house the new municipality’s offices. Civic workers played musical buildings during the new township’s first year, for a time settling on two upper floor apartments on Yonge Street north of Sheppard Avenue in the village of Lansing. When a fire destroyed that office and its accompanying council records in February 1923, plans were initiated for a brand new structure at the southeast corner of Yonge and Empress Avenue.

Designed by Murray Brown, who also designed North York’s official seal, the two-storey structure at 1 Empress Avenue was officially opened on December 19, 1923. Ontario Lieutenant-Governor Henry Cockshutt presided over the ceremony, delivering a generic speech about Canada being a country of the future. “Owing to the large gathering which crowded the new hall,” the Telegram reported, “the Lieutenant-Governor was unable to open the door with the golden key, and just declared the hall opened” Local MP William Findlay Maclean used the occasion to stump for better federal representation for the growing municipality.

The building’s main attraction was its second-floor council chamber. Besides serving as a battleground for municipal affairs, the room was rented to groups ranging from the Orange Lodge to the local horticultural society.

Though the building was bursting at the seams by the late 1930s, material shortages during World War II delayed expansion plans. An extension doubling the building’s size was completed in time for North York’s 25th anniversary in 1947, but the township’s post-war growth quickly made it inadequate. Rather than build another addition, North York erected a new municipal office to the south at 5000 Yonge Street, whose first phase opened in 1956.

Over the next 30 years the old offices, now addressed as 5145 Yonge Street, housed numerous public and private tenants. During the 1960s it was home to a courthouse handling construction safety cases and the local Emergency Measures Organization. The 1970s brought sitcom possibilities via North York’s parks and recreation department, as well as healthcare courtesy of the Victorian Order of Nurses. When the North York Public Library moved its audio/visual collection from its Fairview branch in 1982, the Star named only one of the over 2,000 titles carried on reels of 8mm and 16mm film: Bambi Meets Godzilla. For six dollars, users could rent projectors and screens for 24 hours to watch full-length film classics or half-hour condensations of recent blockbusters like The Muppet Movie and The Empire Strikes Back. A reading lab and youth theatre school rounded out the 1980s. 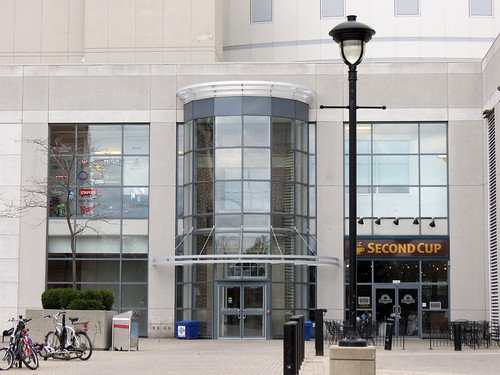 The transformation of Lansing into downtown North York sealed the fate of the old municipal building. In November 1986, North York City Council approved a $10 million deal to sell the site, along with a neighbouring fire hall designed by Brown during World War II, to Menkes Developments. A condition of the sale was that Menkes would preserve the original front façade of the old building and the hose tower of the fire hall. Both buildings were disassembled in 1989 then waited as ever-changing plans, objections from local ratepayers, and mounting interest bills delayed construction of the project that became Empress Walk. Depending on the day, plans included a cinema, condos, office space, and shopping which were built, and a hotel/convention centre which wasn’t. 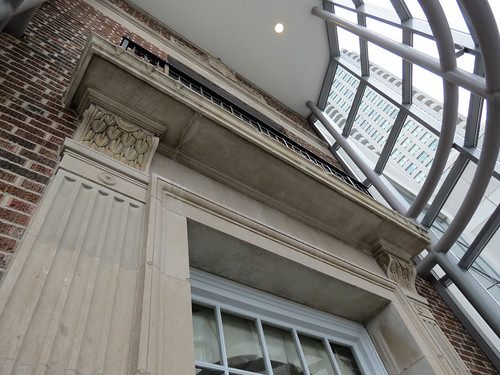 Today, the remnant of the municipal building is attached to the mall’s back entrance, surrounded by glass.