This installment of my "Ghost City" column for The Grid was originally published on January 15, 2013.

That Cumberland Terrace exists as a time capsule of shopping-mall design fits well with one of the site’s earliest uses: A cemetery preserving the memory of loved ones. Currently honoured with a plaque on the 2 Bloor West tower, Potter’s Field was Toronto’s first non-denominational burial ground when it opened in July 1826. 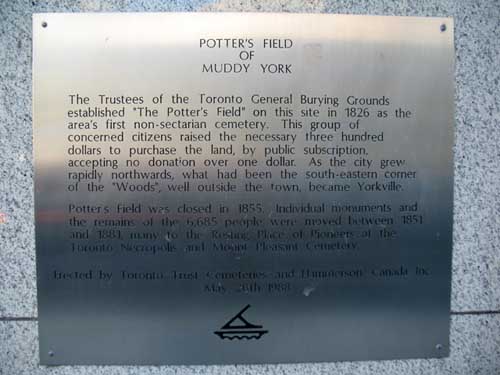 Just as redevelopment a century-and-a-half later pushed out the coffee houses and hippie kids, the growing village of Yorkville successfully petitioned to close the cemetery in 1855. Getting rid of Potter’s Field wasn’t easy—though many remains, including those of 1837 rebels Samuel Lount and Peter Matthews, were quickly moved to the Necropolis, it wasn’t until 1881 that the last of the unclaimed bones were legally sent elsewhere.

The property was soon covered over with businesses and residences. Among the most venerable was the Pilot Tavern, which began as a booze-free restaurant at 800 Yonge St. in 1944. Newspaper ads following its receipt of a liquor licence in 1949 touted the Pilot as “a guide to good foods” specializing in barbecued chicken and broiled steaks. By the 1960s, its location close to the Yorkville scene made it a hangout for artists and writers. Legend has it that when construction of 2 Bloor West and Cumberland Terrace forced the Pilot to relocate to an old auto-repair shop on Cumberland Street in 1972, regulars helped move the fixtures and furniture to hasten the bar’s reopening.

“The nicest way from Yonge to Bay” was Cumberland Terrace’s slogan when it opened on Oct. 14, 1974. Described in an ad as “three glass-enclosed levels of intriguing shops and restaurants,” it utilized fashionable hues of red-and-orange brick and flooring to enhance its landscaped interior. Initial tenants included a mix of chains (Black’s, Classic Book Shops, Dack’s Shoes, LCBO), and independent retailers with odd names like Mr Eat ’Em. Highlights of day one included a steam calliope playing at the northwest corner of Yonge and Bloor and a display of classic cars sponsored by a cigarette maker. Within a month, DeBoer’s opened a two-floor furniture store. The mall’s location above a busy subway junction and across the street from a new parking lot seemed to bode well for its future.

One of the mall’s periodic antique shows caused controversy when a vendor was removed for breastfeeding in April 1981. Jennifer Trott was feeding her two-month old son when boutique owner Rosalie Antel started yelling at her. Antel told the press that Trott’s activity in front of the store made her and her customers uncomfortable, apparently for sanitary reasons. “She was handling dirty money,” she told the Globe and Mail. “She was giving change to people. I don’t think it’s healthy.” Mall manager Ray Wolf asked Trott to move to a less visible part of her booth while breast-feeding, prompting Trott to tell passersby that management opposed children. She was kicked off the premises after telling Wolf’s secretary to go to hell. Two weeks later, Trott and 40 other mothers held a breastfeeding protest inside the mall. While Antel thought the demonstration was “degrading and dirty,” most onlookers supported the protesters and mall management let them be. As one witness put it, “A kid’s hungry, he’s got to eat.”

The mall slowly decayed over the following decades, as its higher-end retailers moved elsewhere and its upper levels emptied. As the owners failed to upgrade the premises, Cumberland Terrace became an unofficial monument to 1970s shopping design. Despite providing a home for independent businesses, it was increasingly viewed as a blight on the increasingly aspirational neighbourhood streetscape. “It’s pretty sad,” Yorkville-Bloor BIA general manager Briar de Lange observed in 2008. “They’ve really only been able to keep the lights on.”

In 2008, Oxford Properties revealed plans designed by architectural firm Bregman + Hamann for a new complex featuring retail, two condo towers, and nine luxury town homes. Holt Renfrew expressed interest in expanding its nearby store into the project, which was slated to begin by spring 2010. While the city approved the proposal in February 2010, neighbouring businesses like the Pilot Tavern were concerned about the development’s impact, especially the height of its podium, which developers agreed to set back further from the street. While an appeal at the OMB was settled in April 2011, groundbreaking doesn’t appear to be on the horizon. During this lull, history buffs should take advantage of one of the last barely altered examples of 1970s Toronto retail architecture.

As of July 2015, Cumberland Terrace is still operating. To cover its walls and empty retail spaces, panels commemorating the history of the surrounding neighbourhood were installed in 2014. There are also odd features such as the vending machine which dispenses cufflinks (and its former partner, the one which dispensed gourmet doughnuts).
Scribbled at 1:02 PM