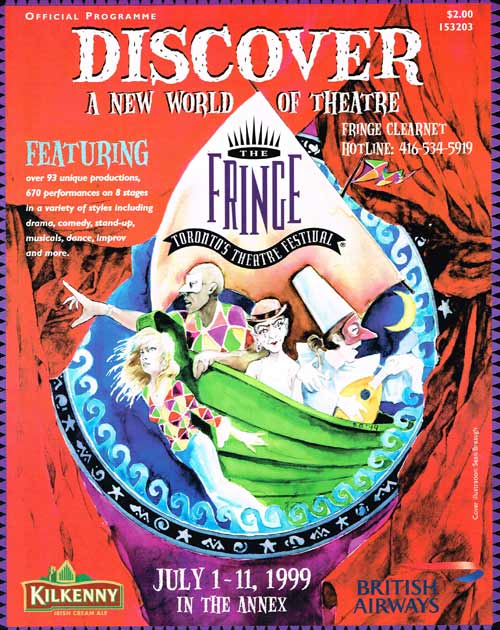 Toronto’s Fringe Festival is currently marking its 25th year, which provides me with a good excuse to look at the first edition I attended, way back in 1999.

At the time I was winding down my days in Guelph. Still recovering from the black comedy of working at the Ontarion, I was searching for work, hoping to avoid returning to Windsor. I had just moved into the cheapest place I ever lived in, the entire top floor of a house near Edinburgh and Paisley, a summer sublet which set me back $140/month. Looking for something to lift the gloom of job hunting, I decided a trip to Toronto was in order. I’d read about the Fringe for a few years, and its ticket prices fit my budget. I’d pick a show at random and hope for the best.

Flipping through the program doesn’t reveal what I saw that year. No tickets slipped inside, no performances circled, no clippings. So I checked a journal from that time. Nada. Then I remembered I had an IKEA box full of clippings from my first few years in Toronto, stuff intended for future journals or scrapbooks that never were.

Near the back of a half-filled scrapbook, past late 1990s Rick Salutin columns, stories about the ’99 Hillside Festival, and reviews of the Tom Waits concert Amy and I attended at the Hummingbird Centre, are a couple of pages about the ’99 Fringe. Slipped among them were whole review sections saved from eye and Now.

There are several notes scribbled on the adjoining page. One confirms the lone production I saw: Me@sure 3.1, a multimedia take on Shakespeare’s Measure For Measure. Another note hints that I would volunteer for the festival in the future, which I did for several years.

The only thing I recall about Me@sure 3.1 is the head-bandages worn by the female lead, and that required prompting from a still printed in the Globe and Mail. Whatever else happened, it didn’t scare me off future festivals. Luckily, the show was well-reviewed. The critics speak:

“Me@sure 3.1 has loads of smart attitude. It does not, however, have anything much to say about the play, aside from noting that the great Shakespearean critique of law and morality should resonate loudly today.” – Kate Taylor, the Globe and Mail, July 9, 1999.

“Coles Notes meets MuchMusic in Me@sure 3.1…Pared down to its essentials, the piece communicates the dark power struggle of the original, but at times the images—everything from an old BBC version of the play to a karaoke scene—overwhelm. You just want the words, minus the white noise of pop culture.” – Glenn Sumi, Now, July 8-14, 1999 (NNN out of NNNNN).

“Sharp lighting and use of technology, rhythmic pacing, music and energetic physicality infuse this heady production with the high energy of a music video or fashion show…This is not for everyone, though—some patrons left angry, feeling they didn’t understand it.” – Rebecca Todd, eye, July 8, 1999 (4 stars out of 5). 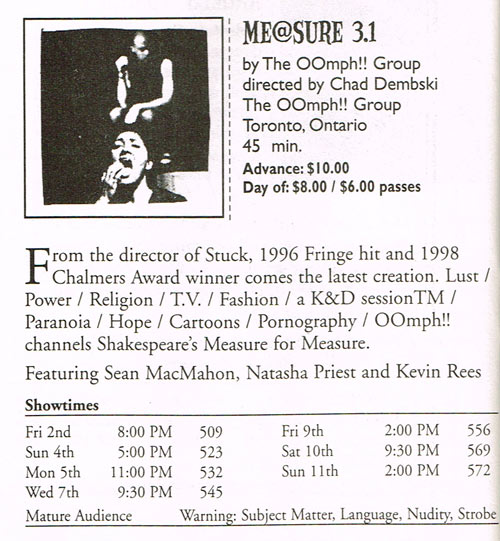 Other tidbits from the ’99 Fringe program…

Readers may use their imaginations to figure out what these productions were about. 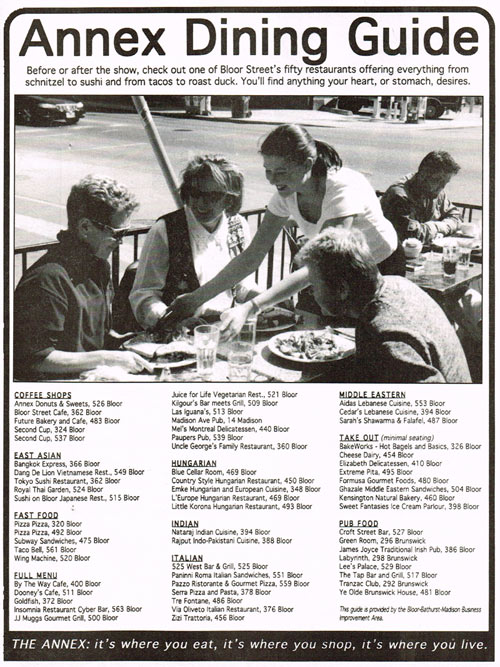 Keeners may count how many of the eateries listed in this ad still feed Fringers. It’s interesting to note the last gasp of Bloor’s days as a hangout for Hungarian food—within a couple of years, Country Style was the last man standing. While I haven’t eaten there in years (the last schnitzel I ordered there had three times as much coating as meat), I occasionally look in amusement at the menu in the window convinced their prices have doubled since this Fringe program was produced. 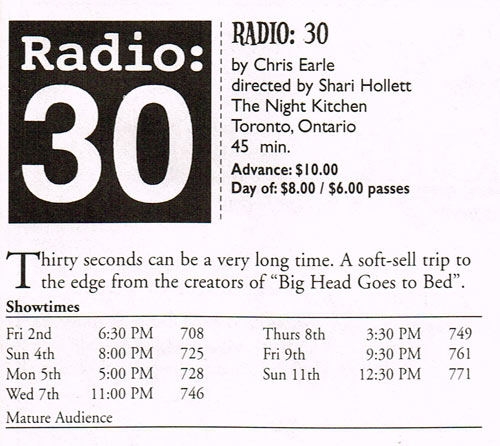 One production which debuted in 1999 returns for this year’s Fringe. Radio: 30 received universal raves during its original run. The production still gracing this year’s program appeared in most of the papers back in ’99.

“Radio 30 questions our gullibility and willingness to believe what we hear—or at least what we want to hear. It constructs parallels between acting and advertising…with humour and brutal honesty. It just doesn’t get any better; this is must-see Fringe.” – Kalil Al-Salaylee, eye, July 8, 1999 (5 stars out of 5). 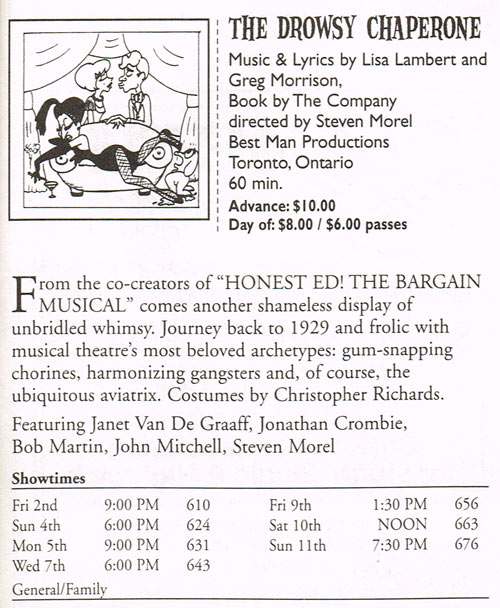 Like Radio: 30, The Drowsy Chaperone received universal raves. The closest thing I found to a pan came from the Star’s Robert Crew: “There are a couple of less-than-perfect performances and passages that need a little reworking.” He concluded his review (four stars out of four) by noting “the potential is enormous and it will be back.”

It came back alright. A remount at Theatre Passe Muraille. An upgrade to the Winter Garden. A Tony-winning 674-performance run on Broadway.
1990s fringe history theatre toronto toronto fringe