famous monsters of filmland presents the funtastic adventures of dr. who 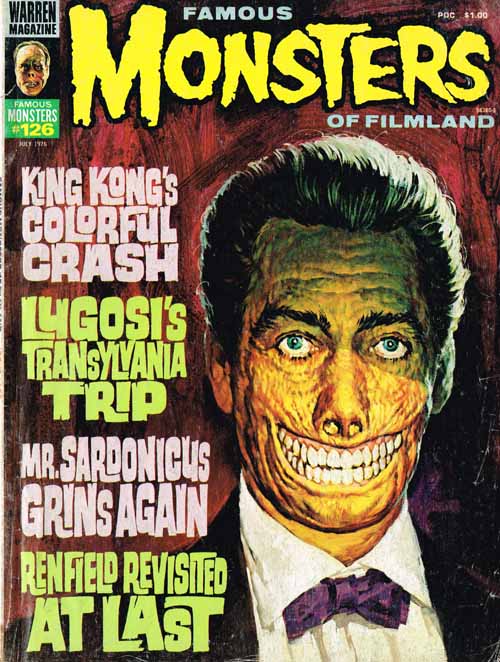 While sorting through the stacks of magazines residing in the official warehouse coffee table, I came across the lone issue of Famous Monsters of Filmland I've ever possessed. Fueled by the horror movie boom on television during the 1950s, editor Forrest J. Ackerman cultivated many a budding film buff with a mix of classic movie stills and articles geared to a younger audience. I picked up this issue out of curiosity amid a stack of 1970s Marvel black-and-white magazines for 50 cents at the K-W Bookstore in downtown Kitchener years ago. Juvenile, but fun to flip through for its great images and breathless prose.

Not mentioned on the cover of the Bicentennial month edition is the second-longest feature in the issue, a profile of a long-running British sci-fi television series which had been shown in a few American markets since 1972: Doctor Who.


At the time this issue was published, the only episodes available for syndication in the US were a handful of Jon Pertwee (aka the third Doctor) stories. North of the border, TVOntario began its long association with the series in the fall of '76. Oddly, half the pictures in the article date from the William Hartnell era -- his episodes wouldn't be shown widely stateside until the 1980s. I'm guessing FMF used whatever stills might have sat around the office or Ackerman's collection since the mid-1960s.

So sit back, relax, and pretend you're a kid learning about the series for the first time. Click on any of the images below for a larger version. 
Bonus feature #2: The cover of FMF #126 features the villain from 1961's Mr. Sardonicus. The film earned notoriety thanks to one of producer/director William Castle's goofier gimmicks. Near the end of the movie, Castle appeared to lead the audience in a "punishment poll" to determine Sardonicus's fate. Legend has it that no audience ever voted to give the bad guy a break -- which was fine, as reputedly only one ending was shot. Castle surmised no audience would ever let the scoundrel go scot-free.
Scribbled at 1:30 AM