the backstreets of toronto: broadway avenue (2)

Part one of this journey. 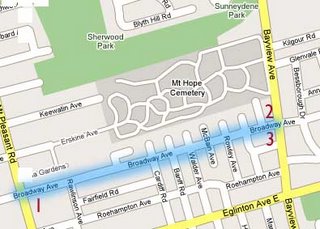 Northern Secondary School marks Broadway's crossing of Mount Pleasant Road. There was considerable debate on what name to bestow upon what was then planned as a joint commercial/vocational school. Possible monikers were tossed around on the front page of the February 8, 1930 edition of the Toronto Star, along with fussy reasons for their unsuitability:

"Eglinton": Would conflict with the public school of that name.

"Mount Pleasant": Would sound too much like the cemetery of that name.

"Roehampton": Name of one of the streets on which the school will stand, is deemed rather an awkward sort of name.

Opinion now seems to favor the name "Northern Vocational School" as expressing both the location and the scope of the school.


One further name emerged: Hudson Vocational School, in honour of the local phone exchange. The front-running name was victorious in a February 11 meeting. The school's cornerstone, laid by Ontario Premier Howard Ferguson on February 21, 1930. That evening's edition of the Star reported the festivities:

To the singing of "O God Our Help in Ages Past," the ceremony began this afternoon. Chairman W.R. Walters, of the board of education, presided. W.W. Pearse, business administrator, placed a copper box in the hollow receptacle in the big stone, the box containing records of the schools, civic reports, daily newspapers, and coins of Canada. The premier proceeded to tap the stone and pronounce it truly laid, Rev. Canon [H.J.] Cody, former minister of education, made the prayer of dedication. The school opened on schedule, welcoming its first students on September 2, 1930. The name changed twice during the 1950s: after a brief period as Northern Technical Commercial, Northern Secondary was bestowed upon the institution in 1958 after an academic stream was added. When the new name was announced that May, the Star indicated that it was the first high school in the city to combine three educational streams under one roof. A notice I found when these pictures were taken in December 2006 (yes, that's how slow the wheels turn around here...). Beyond Northern, apartment buildings peter out into a long stretch of homes, occasionally interrupted by driveways leading to clusters of units. Hills appear on the landscape, which may or may not make cyclists using the signed bike route happy. As the colours of the street signs attest, Corinth Gardens marked the old boundary between the City of Toronto (white) and North York (blue). Two small roundabouts were placed along the North York stretch of Broadway as a traffic-calming measure. While the one at Banff Road includes four-way stop signs as a further speed-curbing measure... ...the one at Rowley Avenue allows traffic to flow more freely.

Note the speed bumps in the background. Unless you're a cyclist, you won't find Broadway to be the speediest, smoothest alternative to driving along Eglinton Avenue. I don't recall if any jokes were made about McBain Avenue when The Simpsons set an episode in Toronto featuring the star of the fictional "McBain" movies. McBain Avenue dead ends on either side of Broadway, with Mount Hope Cemetery stopping it to the north and Charlotte Maher Park cutting it off to the south. The northwest corner of Bayview and Broadway has been home to car dealerships since 1950, when Robert Rumble purchased the last farmsite along Broadway. Originally Rumble Chevrolet-Oldsmobile, it eventually became a Pontiac-Buick lot. After several ownership changes, the Rumble name was replaced by Brennan in 1993. Unlike the moldy oldie photos in the rest of the post, this is how Brennan Pontiac Buick GMC looked in October 2009. With the phase-out of Pontiac, I suspect there will be changes over the next year. Opposite the car dealership is an Esso station. It's not unusual to find the price at this station or the Shell a block south to be 000.0—maybe it's because I live nearby, but temporary pump closures are not infrequent. The last signs marking Broadway as having been part of North York, before it crosses Bayview Avenue to begin its journey into Leaside.

Next: Family connections. Given the pace of this series, expect part three sometime in mid-2010. - JB
Scribbled at 7:49 PM