just as cary grant finds himself holding the knife... 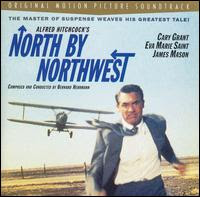 Over the lunch hour yesterday, I popped into the neighbourhood used record store and picked up a pair of soundtracks: The Producers (original film version from the 60s) and North By Northwest. I usually test out additions to my CD collection on the road, so when I needed to head out to the east end to snap photos for a future article, I brought along the disc pictured at left, Bernard Herrmann's score to one of my favourite Hitchcock flicks.

Driving home along Danforth, I noticed a police car with all lights flashing race up behind me...just as the soundtrack reached the scene where Cary Grant suddenly finds himself holding a knife lodged in the back of a diplomat at the United Nations.

My heart jumped out of my body and performed acrobatic stunts I haven't been able to do since grade two.

I pulled over to the side to allow the police to race to their emergency and to chuckle at how the music and traffic had coincided so perfectly. Not the right scene, but the photo was handy

But I shouldn't have been surprised by my reaction. Often when I drive alone, I imagine the music blaring at 11 through the speakers as the accompaniment to a movie scene, usually a title sequence or what Roger Ebert refers to as the "semi-obligatory music video" moment. Someday I expect to see text credits rolling across the windshield. Scenic roads frequently invoke this, as does playing Iggy Pop's "The Passenger" while driving past downtown on the Gardiner Expressway at night.
Scribbled at 9:20 AM