No geeky newsboys for Grit as the 1972 holiday season neared, just a parade of prizes in green and red. Perhaps the paper hoped the colour scheme would appeal down-on-their-luck or tight-allowanced readers desperate for money or economic gifts to give at Christmas?

But wait, isn't this comic book dated January? Wouldn't the holiday season have been winding down to a close or over by the time this issue hit the stands? Nope. Since comic books were dated two to three months after they hit the newsstands, the January 1973 Marvel lineup would have hit newsstands closer to Halloween than Christmas. Wikipedia provides a brief explanation.

Originally published in Tales to Astonish #79 (May 1966), The Titan and the Torment! (story: Stan Lee, art: Bill Everett over Jack Kirby layouts) picks up where our previous look at ol' Jadejaws left off. Konrad Zaxon (evil!) aims his "Organic Energy Attractor" at the Hulk with the hope that once our misunderstood hero is dispatched, nothing will stand in the way of world conquest! 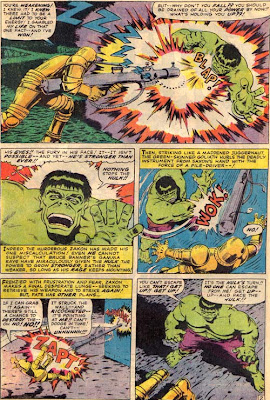 Poor Zaxon never had a chance, his battle with the Hulk akin to the swordsman sequence in Raiders of the Lost Ark. Dying accidentally from your own invention on page two is not a pretty way for a potential world overlord to go. Checking Zaxon's online profile reveals that he hasn't been seen since 1966. It also raises questions about the Hulk's skill as a medical examiner.

As for the rest of the story: army chases Hulk, Hulk decides ripping rails from a desert train lines provides him with weapons, oncoming train happens to have Hercules as a passenger, mayhem and wonderful sound effects (RUMPPH! KRAK! BAR-OOOM!) ensue.