bonus features: the war of the welles

This post offers supplementary material for a Torontoist post I recently wrote, which you should dive into before reading any further.

CBC having control over all Canadian radio stations - imagine the field day Sun Media would have had with that fact had it existed in 1938!

"There is no doubt that [the] United States government will conduct an investigation, and we will leave it them," federal minister of transport C.D. Howe told the Globe and Mail. "We have very friendly relations with their communications commission, but on program matters we deal directly with NBC or Columbia [CBS]. We take the occasional program from Columbia, but it so happens that we had Charlie McCarthy on CBC last night when this broadcast was on Columbia."


A front page photo two days after the broadcast. This shot of the unfortunate Ms. Cantlon ran in many newspapers. Given recent accounts which suggest newspapers hyped up the hysteria to fight back against the encroachment of radio on their profits, a cynic might speculate this shot was faked or highly embellished. If this was legit, those knee scrapes look painful.

Above the previous photo ran this headline....

...and here's the accompanying story. It's hard to say what would have struck more terror in readers: a knife attack by a Czechoslovak in Parry Sound, or the just-averted possibility of a streetcar strike.

All of Toronto's papers issued editorials about the broadcast and its impact. The Telegram's is typical in warning of careless radio listening.

London's city council was not amused by Welles's broadcast. This clipping presents the full version of its resolution calling on the federal government to prevent similar broadcasts in the future. I'm with Alderman Skaggs on this one. 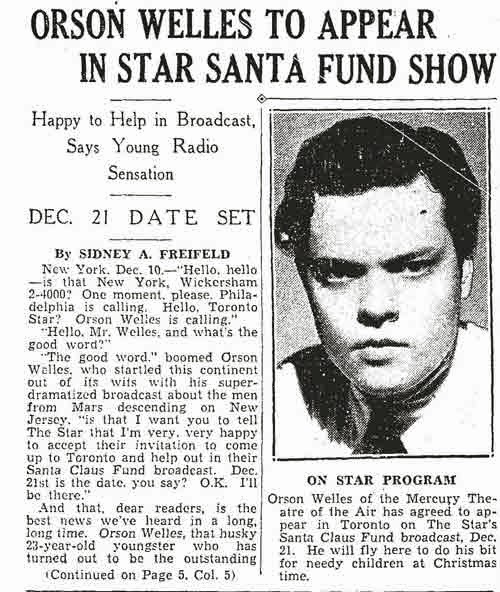 The front page of the December 10, 1938 edition of the Star proudly announced the securing of Orson Welles as a headliner for its Santa Claus Fund radio broadcast. How much of this article contains an actual conversation and how much was invented by the writer is for you to decide. The paper promoted the heck out of the event over the following two weeks, mixing descriptions of eager participants and stories of disadvantaged children designed to soften the hearts (and pocketbooks) of readers. Now in its 107th year, the Santa Claus Fund continues to offer boxes of holiday cheer for 45,000 children.

Additional material from the November 1, 1938 edition of the Globe and Mail.