past pieces of toronto: the uptown theatre

From November 2011 through July 2012 I wrote the "Past Pieces of Toronto" column for OpenFile, which explored elements of the city which no longer exist .The following was the debut installment of the series, originally published on November 4, 2011. 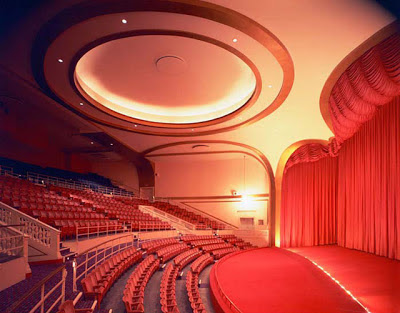 Equipped with the latest in sound technology in its later years, the main auditorium of the Uptown was a great place to see films in which things go boom. As the action unfolded on the screen each punch or explosion reverberated in your seat. Such experiences, and the grand architecture and decor, made the demise of Uptown Theatre so painful: its final corporate parent refused to pay for wheelchair accessibility upgrade.

Loew’s Uptown opened on September 20, 1920 as a 1,600 seat theatre showing pioneering director D.W. Griffith’s film The Love Flower. As the Globe's E.R. Parkhurst reported, “it would be difficult to conceive of a theatre more admirably designed for the comfort of its patrons or better adapted for the enjoyment of the very best that brains, equipment and talent can provide in motion picture entertainment.” The opening gala saw appearances from leading lady (and Griffith’s lover) Carol Dempster, movie star/former Upper Canada College student Bert Lytell, theatre owner Marcus Loew, and Toronto mayor Tommy Church. A live orchestra was present, as it would be through the silent era until the Uptown became one of the first theatres in Toronto wired for talkies.

Following a fire in 1960, the theatre underwent renovations that, when officially unveiled to the public in 1962, the Toronto Star saw as a barely a nod to the new post-television reality of movie-going as a social occasion. “In New York,” noted Star writer Wendy Michener, “many houses serve coffee and have a really comfortable sitting-meeting-talking lounge. In Toronto, the only move in that direction to date has been the installation of hot-dog machines.” Perhaps theatre management sensed that Torontonians of the future would be able to snack on frankfurters anywhere downtown.

Shortly after the 20th Century theatre chain took over the Uptown in 1969, the cinema closed for four months as it was converted into a five-screen multiplex under the eye of architect Mandel Sprachman. Referring to his work on the Uptown and the Imperial Six further south on Yonge (now the Canon Theatre), Sprachman noted that “if I didn’t step in, those grand opulent cinema temples would be torn down and replaced with parking lots and high-rises. What I do is to give old cinemas a new lease on life. Architecturally speaking, I do my damnedest to help the old and new live together.” In the case of the Uptown, the result was a 1,000 seat main theatre for first-run spectaculars (starting with the musical version of Goodbye Mr. Chips), two other mainstream first-run screens, and the two “Backstage” theatres that specialized in art films. The complex was redesigned in eye-catching, playful pop-art influenced colours.

Over time, the Uptown became a key venue for the Toronto International Film Festival, especially as other Yorkville-area cinemas such as the Hollywood and Plaza closed their doors. When the Ontario Human Rights Commission ordered Famous Players to make the Backstage, Eglinton and Uptown wheelchair-accessible in 2001, the chain decided to close the historic theatres rather than incur the cost of required renovations. Famous Players cited a changing market and shifting demographics as the real reasons for the closures, but these were treated with skepticism in the press. The Backstage shut down immediately after the closures were announced in December 2001, and the rest of the Uptown lingered on until it took its final bow during the 2003 edition of TIFF. While the Eglinton survived as an event venue, the Uptown was sold to condo developers. Tragically, the theatre experienced a final burst of reverberating action during demolition work in December 2003 when a section collapsed onto the neighbouring Yorkville English Academy, killing student Augusto Cesar Mejia Solis.